We will stay in the wonderful, whimsical world of the creature feature for just a while longer, but in contrast to last week’s Creature from the haunted sea, which was more or less forgotten as soon as it was released, The blob, which features a young Steve McQueen in the main role, has grown into a bit of a cult classic over the years. And it must ba said that it is a far better movie than would be suggested by the incredibly cheesy premise:1 an alien, gelatinous blob crashes on Earth and starts consuming everything in its path. In movies likes this, usually the police gets involved at some point, but they, are of course, sceptical and have to be convinced of the existence of the eponymous monster. But there are shenanigans going on in the police department! The lieutenant opens a drawer from one of his men’s desks and finds a chess board: 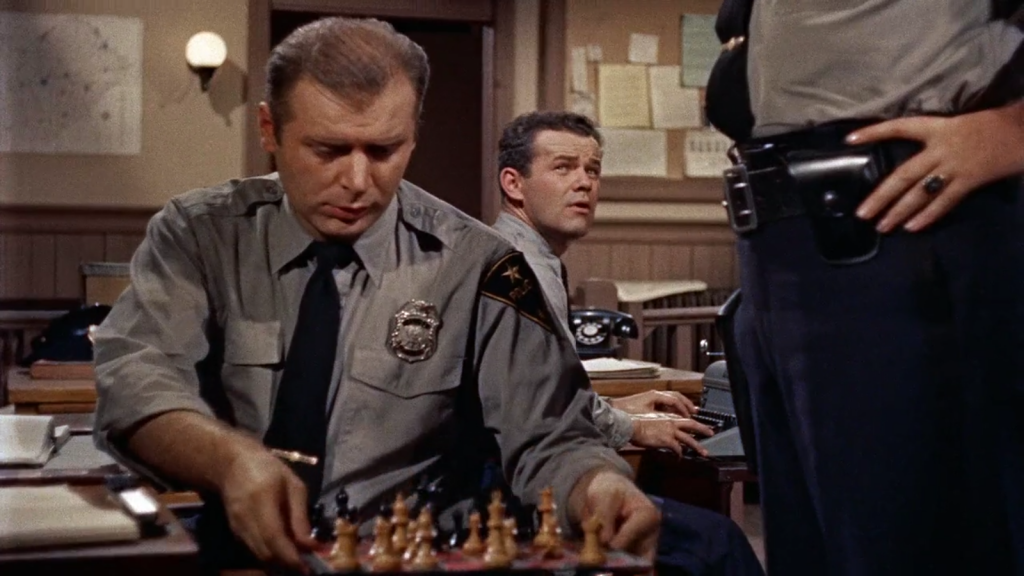 It turns out that, on quiet nights, the officer on the left uses the police radio to call a buddy from another police district to play some chess. It is a joy to see with what care and tenderness he treats the board and pieces. If he is so attentive to his position as well, this could end up being one of the few decent positions to be talked about on this blog. But now I’m afraid to try and reconstruct it. I mean, it’s going to be a disappointment, that’s for sure.

But needs must. The first thing I noticed about the position, was a black bishop on b8, behind a neat line of pawns on a7, b7, and c7. Already, I felt all courage and faith in mankind sink in my shoes, leak through them, and seep all the way to the Earth’s core. But then I realised that the lieutenant, unaware of the drawer’s valuable content, opened it rather brusquely. As a consequence, the poor pieces, obedient to the laws of inertia,2 slid considerably to the queenside and the bishop can safely be assumed to have come from c8. Indeed, a bit later, when all other officers have left, our player contacts his buddy over the radio and the following conversations ensues:

Here we are shown the position – and it is also were The blob loses me.3 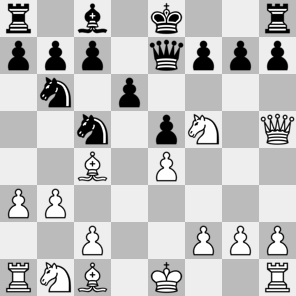 From the conversation above, we can conclude that black just played Qe7 and white answered Nf5 – so far, everything’s alright: black wanted to protect f7 – where, possibly, mate was threatened – and white attacked this new defender. What I don’t understand is the “shucks”. Sure, you’re a bishop down, but white didn’t just take it. The position didn’t get suddenly worse for you.

But maybe he just realised that Steve McQueen told the truth and there really is a blob out to get people.

Realism: 3/5 Every piece on its own is on a pretty logical position. The white knight on f5 and the black one on c5 are slightly strangely placed and very few strong players will play Qh5 so early, but these are just some random schmoes playing, so we should expect slichtly strange moves.

Probable winner: Whoever the person in the other police station is is up a piece for very unclear compensation. And his opponent seems demoralised.