Before Ben Kingsley, before Michael Ironside, before Lee Van Cleef even, the guy you went to if you wanted a memorable villain for your Hollywood movie was Bela Lugosi. Born in Hungary as Béla Blaskó, he is nowadays mainly remembered as the original Dracula, but he played in dozens of other movies, usually as the bad guy and more than once together with that other icon of thirties horror, Boris Karloff. In fact, I briefly talked about him before in this post about The black cat. In today’s subject, The invisible ghost, Lugosi plays a mister Kessler who has lost his wife in an accident and is now haunted by her ghost. Except that his wife is not really dead and that she is haunting him pretty much by accident. Where the ‘invisible’ in the title comes from remains unexplained. 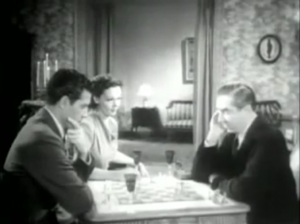 A mister Dickson is tried and unjustly convicted for one of the murders. His brother returns from South America to investigate the case and ends up staying with mister Kessler. In the screenshot above they are playing a game of chess while Kessler’s daughter is looking on.

Unfortunately, the lighting in the picture is harsher than movie critics usually are to late Lugosi flicks and it is very hard to make out the pieces. It’s pretty easy to determine which squares are occupied, but finding out by which piece is well-nigh impossible. Consequently, the following reconstruction might be little more than wishful thinking on my part:1 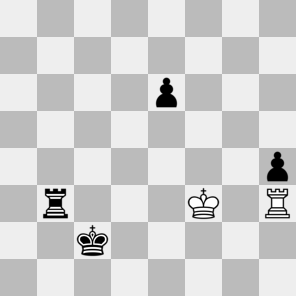 There might be one or more additional pieces hidden behind Mr. Dickson’s wineglass. It is also not completely clear which side is white’s and which is black’s, so the kings might be on c6 and f7 instead of f3 and c2. However, Mr. Kessler resigns in this position, so he’s presumably playing white and looking at the board from the 1st rank.

The position on the board seems eminently plausible. A rook endgame with two pawns down is something which occurs often in practice and it is something everyone would play on. Until an exchange of rooks becomes unavoidable, when resigning becomes a very reasonable decision. Perhaps the most reasonable decision in the late Lugosi’s filmography.2

Realism: 4/5 This position might actually have occurred before. The one thing that seems slightly unusual is that black’s e-pawn is still on the sixth rank.