The prisoner is a delightful cocktail of sixties futurism and mystery fiction with a liberal dash of the Kafkaesque. It is about a former secret agent who one day wakes up in a quaint English seaside village which he soon finds out to be a prison for people with too much too important information in their heads. The series basically deals with him attempting either to escape or to find out what the hell is going on. In the very first episode, he gets a helicopter tour of the premises by someone who goes by number two1 who seems to run the place. During this tour, a former admiral is pointed out to him as being good at chess. Near the end of the episode, we see him playing against our protagonist. 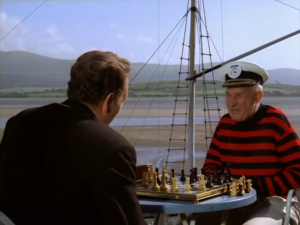 The depressing fact that this pleasant-looking little village is actually a prison is perhaps the reason they have not been able to find a clock. Or perhaps they do have one but there just isn’t enough room for it on the table. Whatever the case be, the admiral is getting fed up with his opponent’s speed – or lack thereof:

Admiral: Come along, young man, we haven’t got all day!

No? Where are you going, old man? You’re stuck in this town too. But at least you set up the board correctly, so I’ll let you off the hook for now.

So what’s the position? Is this admiral really a good chess player? Well, to be honest, I have no idea. You see, the position on the board seems to be the following:2

Yes, really. I tried my best to come up with an alternative, more plausible, interpretation but I couldn’t. It seems like white is really in an impossible-to-come-about double check. On top of that, he is also a pawn and a bishop pair down. Unfazed by all these highly adverse circumstances, our protagonist plays c6. And why not? It’s not like he can get out of the check, so he might as well push a pawn.

This gives his opponent the unusual choice between taking white’s rook, queen or king. Unable to decide, he foregoes all these options and instead goes for bxc6. Our hero gets distracted by one of the overseer’s helicopters flying overhead. The admiral answers by playing some move (not shown, unfortunately) and declaring checkmate.3

In summary, we find two people who play illegal moves, ignore the dreadful mess this causes and then one of them who plays two moves in a row. I think I found out why they’re in prison.

Realism: 0/5 These two don’t seem to know any of the rules of chess. Game of Thrones season 8 might be really bad, but it’s got nothing on this.

1. [Heh. Apparently, the slang meaning of that sentence only became popular in seventies.] ↩
2. [Make your own prisoners here.] ↩
3. [Or perhaps he just noticed white was in an unresolvable double check and decided this must be a checkmate.] ↩