Justin Timberlake started his career all the way back in the early nineties as a member of the boy band NSYNC . In the two thousands, he went solo and several of his singles, like Cry me a river and SexyBack,1 apparently unhindered by a severe lack of diaphragmatic support, polyphonic content, or a decent orchestration, became worldwide hits and cemented his name in the annals of modern popular music. His image is that of a suave, sophisticated, sharp-dressed, sexy socialite. In the song under scrutiny here, the main focus is on the penultimate adjective, but to remind the public that the one before that applies as well, the accompanying music video, which was directed by none other than David Fincher, shows Justin playing chess with a lady who, since this is a pop song after all, appears half naked.

I’m pretty sure this scene is supposed to take place on a film set, in view of the huge hall they are in, their incongruent attire, and the presence of a third person on the right as well as a slightly worried-looking cool box on the left.

The shot of the position is reasonably clear and I’m pretty confident in most of the position. There are two slight caveats, though: first of all, there is a knee obscuring the lower left corner of the board, so I’m not entirely sure white’s rook is really on d1 and not on, say, e1. Secondly, I cannot make out black’s second rook. It does not seem to be next to the board, so it is probably obscured by the white king, which means that’s almost surely on f8. All these considerations lead to the following reconstruction:2 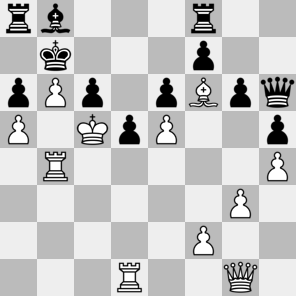 When it comes to chess content, this might be the most interesting position I ever spoke about on this blog. White is clearly for choice. He is a pawn down, but he has much more space and it is not clear at all how black is ever going to develop his queenside. However, stockfish finds a possible save based on the fact that Qf8 would win a rook. After 1. … Rg8 2. Ra4 it suggests giving up first a pawn and then an exchange with 2. … g5 3. hxg5 Rxg5 4. Bxg5 Qxg5 5. f4 Qe7+ 6. Kd4 f6 7. Qe3 fxe5 8. fxe5 Qg7 to finally get some activity for his bishop. The idea is that now Bd6 is possible because the e-pawn is pinned. There’s still everything to play for here, but I don’t see a mere mortal finding such a line.

It seems that white’s last move, Kd4-c5, was a blunder, because it allows these Qf8+ motives. Instead, my engine suggests the hilarious Rc4. The point is that after dxc4 Kxc4, white can simply play moves like Rd7+, Qd1, and b7 while black’s heavy pieces can only look on from a distance. If black declines the rook sacrifice, white will just go Rc5 and press on the c-pawn. Once black’s pieces are tied up defending it, white can prepare a break on the kingside, force a second open line and infiltrate black’s position.

One thing’s for sure: this one position is more interesting than Timberlake’s complete oeuvre.

Realism: 3/5 There is nothing outrageously implausible, but I cannot help but wonder how on Earth black got himself into this mess or how both queens got sidetracked like this.

Probable winner: Well, white has the much better chances, especially in a practical game, but if Justin turns out to be a great defender he might just get a tie.

1. [It is one of the profound contemporaneous mysteries why there is no space between ‘sexy’ and ‘back’. As it is, it sounds like the name of a strip club in the outback.] ↩
2. [If you want to make a diagram, this might suit you. Or tie you.] ↩