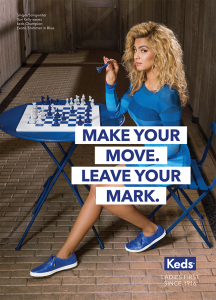 Like what on Earth is supposed to be going on here? Obviously, this is just the result of a photoshoot, but what is it supposed to portray? Where is this woman? Is this a walled-off piece of pavement? What sort of construction is casting the strange shadows? Is that an old-timey Dutch door door in the background? Why are the black squares and pieces actually blue? Does celery fear the moon?

One question I can (attempt to) answer is why she is sitting at a chessboard without opponent and without book. Probably, she is analysing a game. As she seems to be reconstructing it from memory, it seems likely that it was a game she played herself – and probably not too long ago, for that matter. No doubt, she is now trying to pinpoint the most important mistakes. Afterwards, she will check her analysis with stockfish. Let’s join her!1 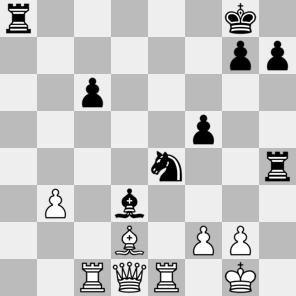 Our protagonist is holding the black queen in her hand; she was most likely caught mid-move.2

From the position, we can safely conclude that she is not working on her opening repertoire. In fact, we can conclude that her analysis should have ended some time ago: black is enough material ahead to make the position clearly won for her.

So maybe she is just gloating over a recent victory she scored over the photographer.

Realism: 3/5 It is kind of rare that a kingside attack like black’s here can happen while the queenside has already been eliminated and it is not quite clear what happened to white’s h-pawn, but overall there’s nothing majorly wrong with this position.

Probable winner: It seems to be black‘s move and wherever the queen is coming from, it can be put on a safe square. This means that she is up both a knight and pawn for no clear compensation. That should do.

1. [You can join this site to make your own diagrams.] ↩
2. [I am not sure whether the subject of this sentence is the piece or the player – and I wrote the damn thing!] ↩