They know. They all know. I’m convinced of it. All these directors, painters, marketeers – they all knew that, one day, a supreme weirdo would rise from the swamp.1 Someone who pauses movies whenever a chess board appears on screen. Someone who’ll read a comic book because two people play chess in one of the panels. Someone who stares at an ad and forgets which product it’s praising because he’s trying to figure out which piece is which. Me. In response, a whole arsenal of tricks was developed to avoid getting one’s work dissected on this blog: one can keep the board in the background, one can show it only form afar, or only part of it. Or one can hide behind low resolution. 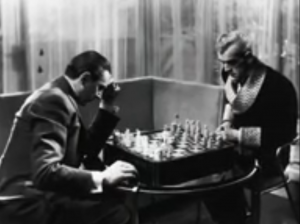 The black cat is a 1934 film, mainly known for being the first movie starring both Béla Lugosi and Boris Karloff – the two greatest horror movie stars from the thirties. Its title comes from an Edgar Allan Poe story it has nothing to do with. In fact, the eponymic feline has little to do with the movie and could be cut without too much trouble.

The plot involves a couple of American newlyweds that get caught up in a personal reckoning between the psychiatrist Vitus Verdegast (Béla Lugosi) and the architect Hjalmar Poelzig2 (Boris Karloff). The latter turns out to be a satanist priest who wants to sacrifice the female half of the couple. The former objects and they decide to settle this disagreement the way gentlemen should: they play a game of chess for it.

Unfortunately, the low resolution defence is very effective and the exact position – or even a good approximation, for that matter – is very hard to determine. But that’s what I’m going to do to it now. Slowly. Bit, by bit.

In the image above, most of the pieces don’t seem to have moved yet. Black’s queen’s knight has already ventured abroad. There’s also some pieces on f4 and I see no reaonable alternative to it being the white queen. The last thing I can say with reaonable certainty is that there’s a black pawn on e6. My best guess is that the following happened: 1. e4 c5 2. d4 cxd4 3. Qxd4 Nc6 4. Qe3 e6 5. Qf4 although I must admit that the white queen manoeuvres are a bit puzzling.

I guess she’s about to be sacrificed.

Realism: ?/5 Who knows? My reconstruction of the opening would earn something like a 2 out of 5, but that’s pretty meaningless.

Probable winner: Hjalmar Poelzig. As he himself says, “Checkmate. You lose, Vitus!”

1. [Aka the Society for weird and map people. Strangely, I’ve never been a member.]↩
2. [This name comes from an actual architect, who, like the black cat, has nothing whatever to do with the movie.]↩