“The good old days.” What rot! Rarely has such a huge amount of bullshit been concentrated in one sentence.  In the old days, people died of smallpox, people were famished, people dropped dead en masse before they were fifty. There were no computers, there was no internet, there were no billions of cat pictures available at a single keystroke. No, the olden days were lousy.1 One thing I must admit, though, is that they were classy. Just look how booze used to be advertised: 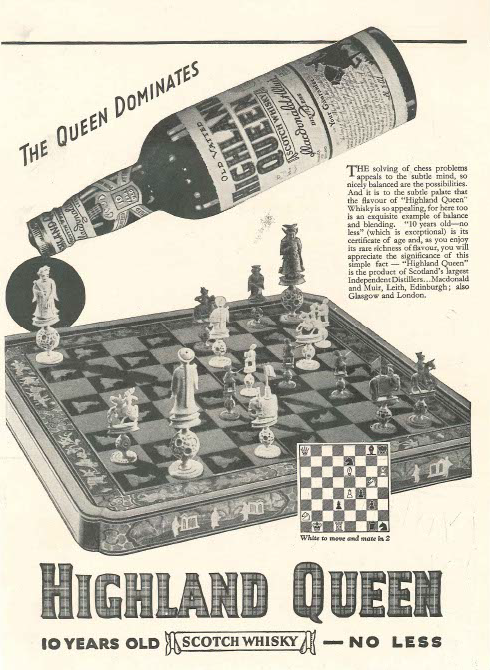 “10 years old – no less” is apparently their motto, which is rather nice; it’s good to see the breweries take a stand against underage drinking. It’s even better to see them take a stand for chess. Problem chess, no less. If it were a contemporary advertisement, the queen would probably be some scantily-clad lass and instead of an ode to the subtle mind we would have some questionable double entendre, possibly involving the word uncork.

The diagram in the ad is pretty clear, but let’s resume it for completeness’ sake. The only uncertainty is the piece on h6, but judging from position on the actual board it is most definitely a pawn. This means the position is the following2 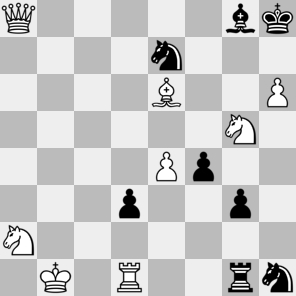 …and this is were I have to retract all my praise, because the problem is cooked. It is quite easy to see that the only possible reason for the knight on a2 is to clear the way for the queen, while preventing the check on d1. Therefore, the key move is obviously 1. Nc1 – but it doesn’t work: after 1. … Rg2 there is no move in 1, as 2. Qa1+ is now met by 2. … Rb2+. Netiher does the problem work as a mate in 3, for then 1. Qxg8+ Nxg8 2. Nf7+ Kh7 3. Bf5+ would be an alternative solution. This is especially stupid, since putting the g3 pawn on g2 would solve the cook.

Even then, of course, it would not be a great problem. For example, the knight on h1 would still be utterly pointless, and the only function of the d3-e4-f4-g3 pawn front is to keep the rook from prolonging the mate by interposing itself. I think the easiest fix would be to

after which it would be a very uninspired problem, but at least a sound one.

Man, the past looked classy but it was rather stupid.

Probable winner: Milan Vukcevich maybe? Certainly not whoever made this problem; he clearly had too much Highland Queen.

1. [I was planning to say something about how that’s even  literally true, but it turns out that reliable data about historical levels of louse infections are hard to find.]↩
2. [Made with ten years old diagram editors – no less.]↩
3. [Graham Chapman might be able to help.]↩