CIPC #123: Creature from the haunted sea

Long before Michael Bay and Steven Seagal were the schlockmeisters par excellence of the film world, way, way back in the swinging sixties, the b-movie scene was dominated by the incomparable Roger Corman. From the fifties to the seventies he directed a staggering amount of low-budget movies, reaching in 1957 alone an astonishing 9 movies. And with titles like Attack of the giant leeches, X: The man with the X-ray eyes, or The saga of the Viking women and their voyage to the waters of the great sea serpent you just know they’re going to be great! Of course, in such a tremendous amount of film, there is bound to be some chess scene somewhere and, indeed, shortly after the beginning of Creature from the haunted sea, one of his lesser known creature features, we can see a female spy in a shady bar playing chess against herself: 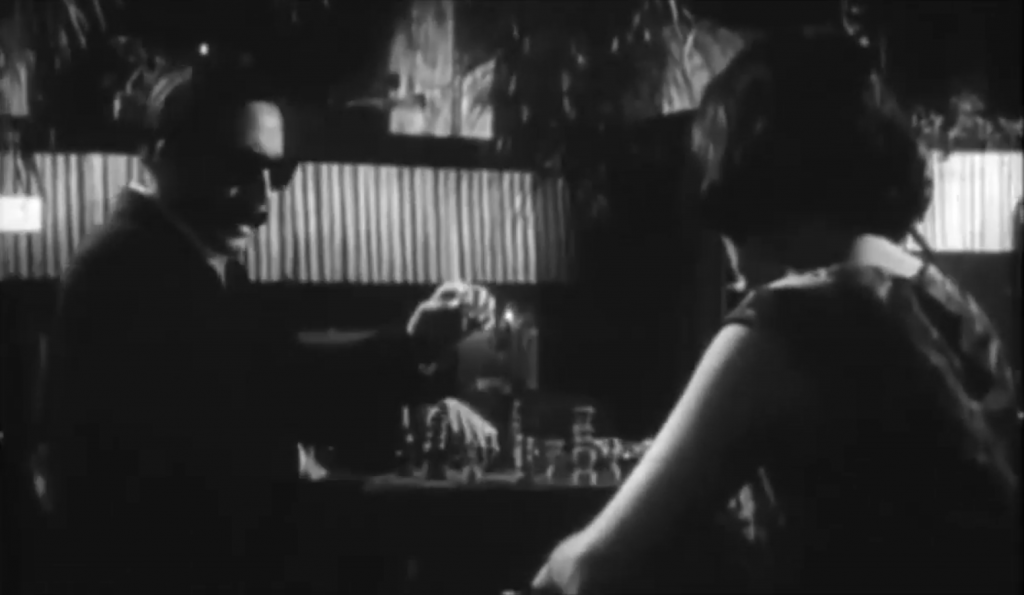 The plot of the movie is, unsurprisingly, a bit silly. Some guys are trying to smuggle a large part of the Cuban treasure out of the country after Castro’s revolution. The captain of the ship used for this purpose fancies some of that sweet, sweet booty for himself. He stages the appearance of a monster in order to get rid of the military bozos that hired him, but, much to his surprise, the monster turns out to actually exist and makes an appearance1 maybe fifteen minutes to the end.

Of course, given Corman’s reputation, I’m not exactly expecting great things, but surely it is not too hard to look up a famous game – Anderssen vs. Kiesertizky, maybe, or Byrne vs. Fischer, or something – and have this featured in the movie? Of course, as the faithful reader knows, even the greats of cinema usually fail to do so…2 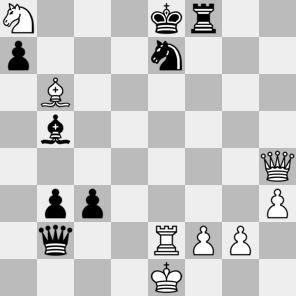 Both sides have a mate in one at their disposal.  Apparently, it’s white’s move, because agent XK-120 plays Qxe7+ and announces

in a delivery that has to be seen to be believed.

Note that, instead of the usual Staunton figures, pieces based on those by Calvert seem to be used. Luckily, the view we get of the board is good enough that the reconstructionve is nevertheless fully reliable. Which is a pity, because the position is a bit of a mess.3

For example, it is rather strange that at such a late point in the game both kings are still on their home squares, which must have made the life of the rook on h1 rather depressing. How white’s knight and bishop got stuck in black’s queenside is another very good question.  And if anyone can suggest a non-ridiculous last move, I’d be very impressed.

Which, by the way, makes this a rare Corman flick for which the monster du jour is not the least realistic thing in it.

Realism: 1/5 There’s just no way. Even in a bullet game between two absolute idiots I don’t see this position occurring.

Probable winner: Agent XK-120, but that’s not much of an accomplishment, given that she’s playing against herself.

1. [And an absolutely hilarious one at that! Seriously, the thing looks like a befuddled cookie monster.] ↩
2. [The greats of cinema also fail to make diagrams of the positions in their movies available, even though that would make my life so much easier.] ↩
3. [Of course, with this blog’s track record, “a bit of a mess” makes it top-tier material.] ↩