Apparently, there are people out there. As if that thought wasn’t scary enough, those people sometimes want to meet each other. This is precisely what the founders of meetup.com realised when they launched their site all the way back in 2002. Of course, the people that are already out socialising are not a very interesting audience for meetup.com, so when they decided to do some advertising they naturally wanted to focus on shut-ins and weirdos. In order to reach this audience, they used the two quintessential symbols of the committed sociophobe: chess and cats. In fact, the ad is basically a guy1 trying to play chess against his cat:2 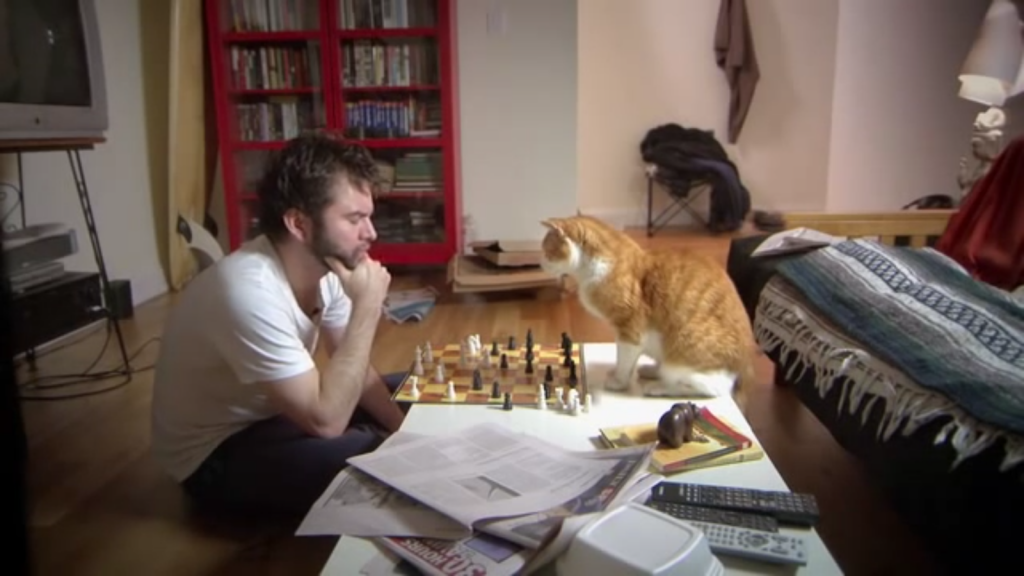 I am very happy to report that the board has been set up correctly, although I am less thrilled about the fact that it is protruding over the edge of the table. This would work better is the cat was sitting on the sofa – which is anyway the natural habitat of a cat – and the board was nicely centred on the table. There is also no clock, but I guess this is just a friendly game.

The shot pictured above is perfectly clear and more than suffices to reconstruct the position with reasonable certainty:3 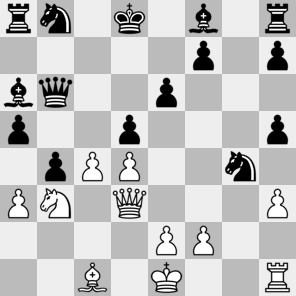 This is patently ridiculous. Apparently, the cat is the by far superior player, because white has managed to lose not one, not two, but three full pieces – and a pawn to boot! Okay, he’s going to win back the knight on g4, but I still think meetup.com should try a different demographic; the world isn’t exactly clamouring to see more of this dweeb.

But things get worse. Oh yes, they do. You wouldn’t that’d be possible, but they do: we get a nice, crisp view of board and cat where, admittedly, we see little more than the black pieces, but they are in the following configuration:4 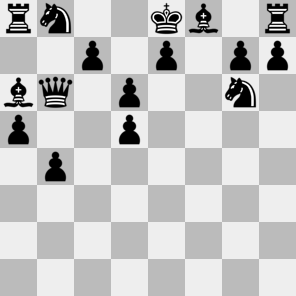 Hm. If you will excuse me for a moment.

So what the hell happened here? The knight and the h5 pawn retreated hastily to a more sober position in life, the e7 and d6 pawns stepped to left,5 the king went to the right6 and a whole new pawn popped into existence on c7. Somehow, this whole operation has made the position even more unlikely. Especially that pawn on d5 must have quite a story to tell.

We cut back to the first angle and, with it, the first position. White advances his c-pawn (which is a horrifyingly stupid move, as he will not be able to take the g4 knight after, say, Qc7) and we get our next close-up: 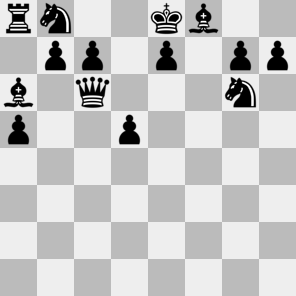 I see. I believe I will need another minute.

Good, that’s out of my system. Apparently, black’s b-pawn somehow retraced its steps all the way back to b7, making the queen sidestep to c6. The rook from h8 and the pawn from d6, which probably felt it couldn’t get out of pawn d5’s shadow, decided to just bugger off and presumably get a beer somewhere.

Again we cut to the first position, except that, by magic, a white bishop has appeared on g5. The cat notices that something fishy is going on here, and as cats tend to love fish, he goes for this newfangled clergy, knocking over most of the pieces in the action.

Dweeb: You can’t do that.

Yeah, you’re one to talk, switching between parallel universes like it ain’t no thing.

Text on screen: Maybe you should get out more.

I agree. Take up crocheting, climb the seven summits, make a study of the number of grains in an average sugar cube,7 do whatever you like – but please, for the love of God, leave our poor game alone!

Realism: -/5 Random successions of completely idiotic positions, with pieces appearing and disappearing at will – I think this is what followchess shows in hell.

1. [But the stereotype is more women with cats, isn’t it?] ↩
2. [Which looks like it’s trying to hold an intervention for him.] ↩
3. [Should I meet new diagram making software? Or shall I stick to what I know?] ↩
4. [Okay, the a5 and b4 pawn are so badly centralised they might as well be on b5, but that doesn’t substantially affect my thesis that this sucks. Big time.] ↩
5. [Presumably, they’re the clowns…] ↩
6. […and the king, as we all know, is just a joker.] ↩
7. [Estimates suggest a bit less than twenty thousand, but we need experimental confirmation.] ↩