Here we are again. Like a murderer returning to the scene of the crime, I always seem to circle back to Zorro.1 This time, we follow our hero as he travels to Monterey with his servant Bernardo to find out whether an important but unspecified business run by a mister Verduga is worth putting money in. Pretty much immediately on arrival, he is robbed but, as he did not bring the 17.000 pesos expected of him, the robbers leave empty-handed. It turns out that many people before him suffered the same fate and in order to investigate these robberies, he prolongs his stay in the local tavern.2 This is very good, because people play chess there! In fact, we see the first game even before the robbers. 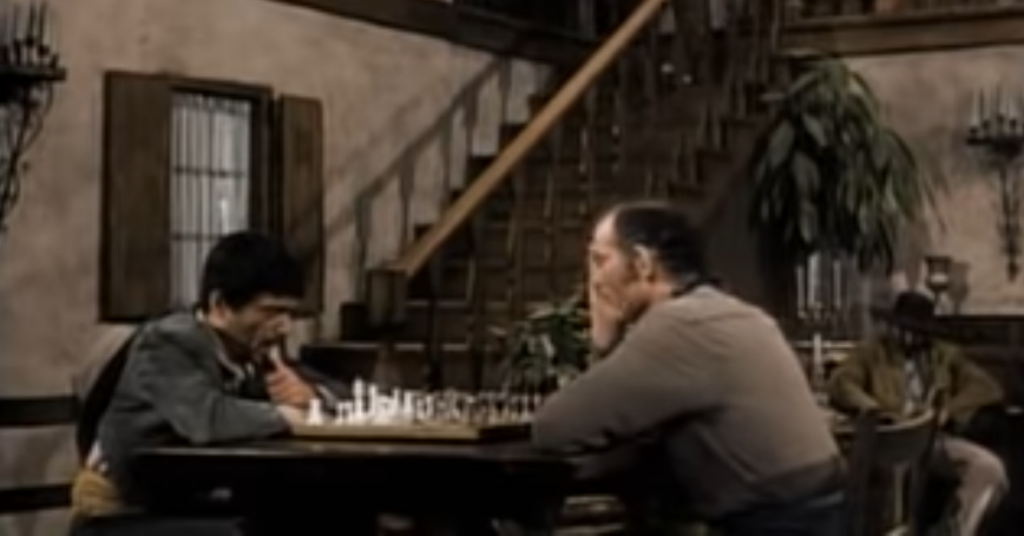 Unfortunately, this show was, as I’ve pointed out before, filmed in the fifties on a slightly more advanced successor to the original potato. Consequently, it is almost impossible to make an even vaguely acceptable reconstruction of the position on the board – an excellent reason, I feel, to make no attempt. Let us just try to make out a few things. First of all, it seems like white has left his kingside pawns in place and has developed his g1 knight (I think to f3) and his f1 bishop. All very logical, but logic usually doesn’t make it to this blog. A short while later, don Diego de la Vega meets mister Verduga and there is another chess board on a table. Don Diego immediately investigates… 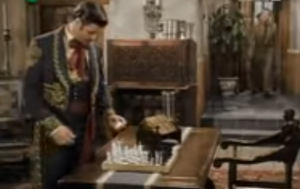 …and he makes a shocking discovery: this position seems rather logical, too! Here, too, white has already developed his kingside pieces in what seems to be some open game. His dark-squared bishop appears to be on g5, which is a perfectly acceptable field. Black’s pieces seems to be reasonably developed as well. (Of course, still with the caveat that it is almost impossible to say something definite about any of these positions.)

And still this episode isn’t over. Verduga’s daughter is talking with one of his business acquaintances about don Diego and Bernardo, who they suspect really have brought the 17.000 pesos with them. They confront him, but to no avail. On their way out, they pass through’ the inn’s front room where another game is being played: 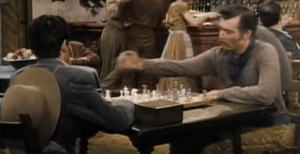 Here, it seems like the position is less plausible. White’s king seems to be somewhere around c2, a black knight seems to be on what perhaps could be a5, and some unidentified white piece has infiltrated black’s position and seems to be on f7.

The guy on the right notices this too and, in an understandable3 act of blind rage, sweeps the pieces of the board. I think he might be a CIPC’er and have gotten fed up with this kind of shit.

Probable winner: I have no idea for the first game. I’m not even sure the second was from a game and not, say, some analysis. The third one seems to be a definite victory for white.

1. [After writing this sentence, I of course tried to find out where this highly questionable adage comes from. I have not been able to find a definitive original source, but I stumbled upon the FBI crime classification manual which apparently – and hilariously – classifies serial killers as organised, disorganised, or mixed.] ↩
2. [Of course, instead of investigating anything, he could just have noticed that Lee Van Cleef is in this episode.] ↩
3. [But not condonable.] ↩