One might easily forget it, but the great Alfred Hitchcock started his career all the way back in the twenties, more than thirty years before Psycho, making silent movies because talkies weren’t a thing yet. One of these, the one that put him firmly on the map, in fact, was The lodger: A story of the London fog. Its plot is heavily inspired by the Jack the Ripper murders in Whitechapel, London at the end of the nineteenth century: a serial killer goes around London, butchering a young, blond woman every Tuesday. After these facts have been established, we are introduced to Daisy Bunting, a young woman who works as a model for a local fashion show. Despite her blond hair, she is not too worried about the serial killer and cheerfully reaches home. Her parents take in a new lodger and then, as the title cards put it, “one evening, a few days later, the lodger made himself agreeable.” Apparently, this means he plays a game of chess with Daisy.1 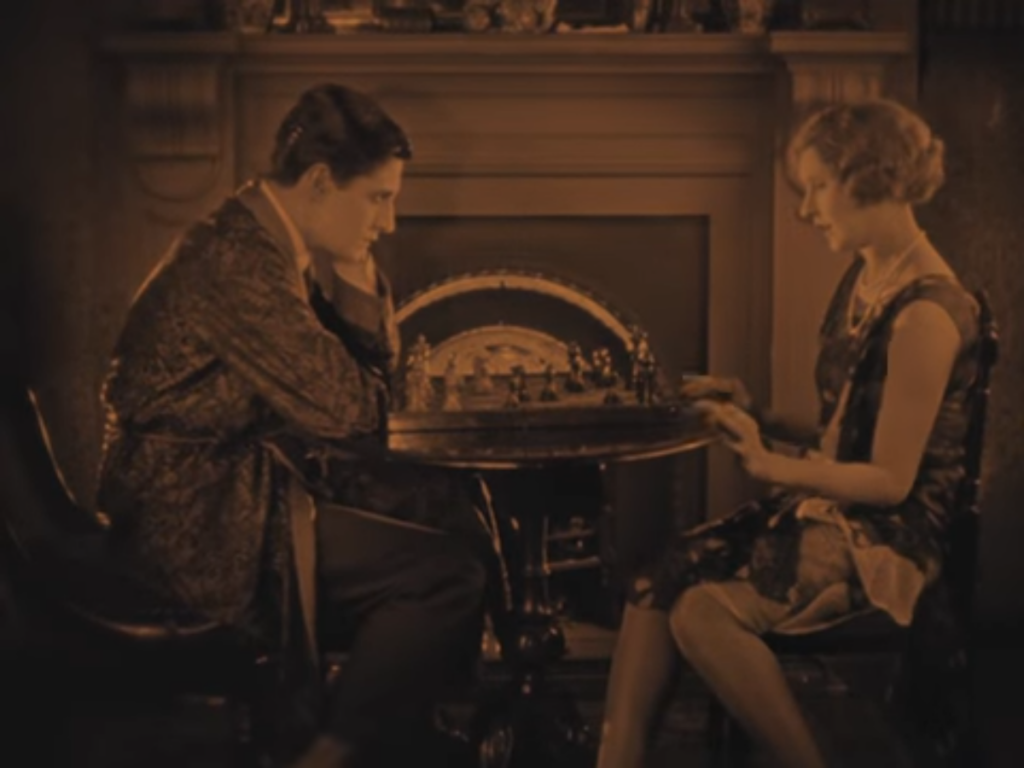 Going into this, I was rather optimistic. After all, Hitchcock is one of the most respected directors in the history of cinema. You don’t get universal acclaim like that without a good eye for detail. On the other hand, the greatest directors I featured on my blog so far are probably John Carpenter and Quentin Tarantino, both of whom failed miserably in the chess department.2 Will sir Alfred do better? Let’s find out! (Man, I’ve written that selfsame sentence so stupidly many times, I’ve started to grow suspicious of it. So don’t get your hopes up too high.)

We see the board only from one side, mostly in the camera angle shown above, with some parts of the board appearing in more close-up shots of the two players. Putting all of this together, we arrive at the following reconstruction:3 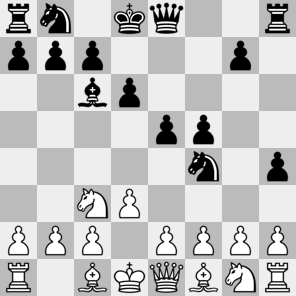 I’m not completely sure of black’s queenside, but it is safe to conclude that Alfred did not do better. Neither did the players, for that matter. Black eagerly pushed forth on the kingside, but somehow managed to lose a bishop on the way. Meanwhile, apart from grabbing said bishop, white did pretty much nothing.

The lodger, who we are probably supposed to at least vaguely suspect of being the murderer, declares that he will get Daisy yet. To achieve this lofty goal, he plays d4, and after the incomprehensible answer ex4 – which hangs the knight on f4 – he plays the equally incomprehensible Qd2. Then there follows h3.

Realism: 2/5 At least every piece regarded on its own is in a logical place. Except for the pawn on h4 of course. Or the knight on f4.

Probable winner: Well, white is a bishop up, but the fact that he only managed to develop one piece in at least ten moves got me slightly worried.

1. [It seems I have been making myself agreeable for years, now!] ↩
2. [In this case, Tarantino also kind of failed in the directing department.] ↩
3. [You can make your own diagram here. Only silent diagrams, though.] ↩