Translucid is an artsy take on the superhero genre published by BOOM! studios in six instalments between April and September 2014. I must admit that I haven’t read it, but the reviews seem to be generally favourable and the artwork seems to be above par. It’s focus is on a supposed supervillain with a horse’s head and his nemesis without a horse’s head. It is perhaps – well, definitely – not the most famous American comic, but at first glance it seems no worse than its competition. And it has chess in it! So that makes everything okay, right? Right? It does not showcase the most ridiculous, idiotic, pathetic excuse for a chess position that has ever blighted the Earth with its existence, right? Please say it doesn’t? Pretty please?

Well, fuck. Let me sketch the scene real quick: a bunch of school kids1 are on a day trip to the New York Hall of Science, where they are treated, if that’s the right word, to a lecture on and display of holographic technology. Somehow, future scientists have mastered the art of interacting with a holographic projection.2 Apparently, the most impressive application of this incredible new technology is playing a game of chess with someone in the ISS – the sort of thing that sounded really cool in the eighties.

And what position did our esteemed lecturer choose for his demonstration? Perhaps something from the evergreen game between Anderssen and Kiesertizky? Fischer’s “game of the century” against Byrne? Or, as it just for demonstration purposes, perhaps a nice problem by the great Sam Loyd? A thousand possibilities! But no. Instead, we get this:3 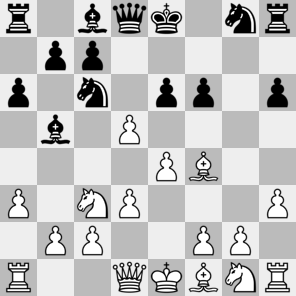 …and it makes no sense. Black has two light-squared bishops, which is highly implausible, and white has no fewer than nine pawns, which is  completely impossible. One could argue that maybe something went wrong with the projector and the pawn on d5 should actually be a black one and that after correcting this obvious error the position would not be too bad, but one would be dreadfully wrong. In that case, the only missing piece would be black’s dark-squared bishop either the bishop on b5 or the one on c8 started its career as a pawn on g7. But how could it have been promoted? A pawn on its way to promotion from g7 must have taken at least one piece, but no white pieces are missing!

No, the only way the bishop on b5 became a bishop is through rotten old nepotism.

Realism: 0/5 This position is illegal twice. That should lead to a certain conviction.

Probable winner: Realistically, nobody wins, as this was just a demonstration game. However, we CIPC’ers got a good laugh out of it, so for once we are the winners!

1. [Who all look suitably bored.] ↩
2. [But not the art of making holograms any colour but blue.] ↩
3. [Projected with the most cutting-edge technology available to man.] ↩