It is a truth universally acknowledged that any single thing capable of making a fortune must be in want of a movie script to be made into. It is, then, not a great surprise that there exist Barbie movies – but there’s twenty-three of the bastards! That’s (at the time of writing) more than the Star Wars and The Lord of the Rings franchises combined! Yet, I’ve never even heard of a single one of them reaching movie theatres. However, it has gotten to my attention that chess makes an appearance in one of them; of course, I tracked it down. It is called Barbie in the 12 dancing princesses, but does not actually feature any character named Barbie or royal cannibalism. The chess scene happens quite early, when the plot, or what there is of it, is only just starting to unfold. Genevieve, one of the twelve princesses and the closest thing the movie has to a protagonist, is playing against her father, the king. 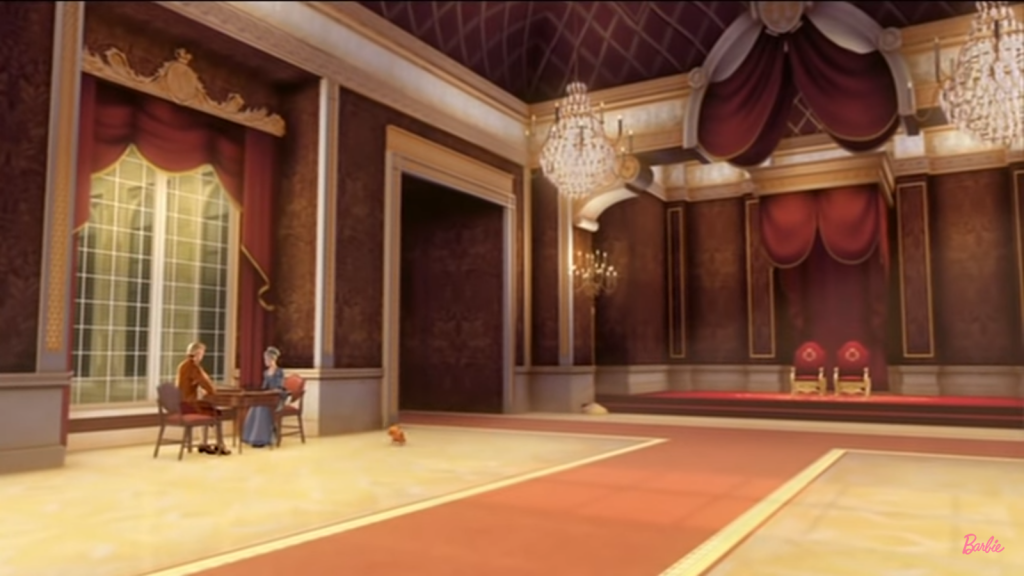 It immediately becomes clear why these Barbie movies never make it to the movie theatres:1 the backgrounds look like something out of a nineties video game, everyone looks somehow more plastic than a Barbie doll, the characters are about as developed as North Sentinel Island, and the plot – well, let’s just politely say that it doesn’t fully bare scrutiny. The only decent thing is the soundtrack, which makes extensive use of Mendelssohn’s 4th symphony.2 Or perhaps the chess as well?

As you can gather from the picture above, the position on the board is not shown very clearly at first. We hear the king, who is playing white, announce his move

Genevieve: You’ll have to wait a little longer.

At this point, a close-up shows the board in much more detail than one could ever want:4 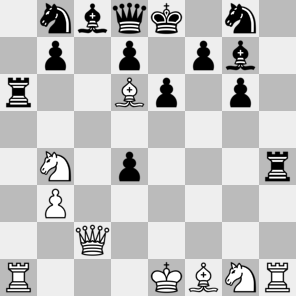 Gah! What the hell?! That’s horrifying! This movie is for kids? Look, I can sort of understand black’s set-up: getting the rooks out early is a favourite strategy with beginners, presumably because rooks seem sort of straightforward. But what on Earth has white been doing? It’s weird enough that he somehow rode his knight to b4, but how, dear Lord, how did he lose his pawns? If you sacrifice a pawn – let alone five! – you’re supposed to get some compensation. Development, typically. Yet, white’s kingside is completely undeveloped. His bishop on d6 would be some sort of compensation – blocking black’s d-pawn and making his development harder – if it wasn’t immediately en prise. Genevieve indeed takes it.

King: Oh! How did I miss that?

Well, if you were anybody else, I would assume you had missed this move because it is just so outrageously stupid. After all, Rxa1+, the most obvious move on the board, would win two rooks instead of losing the exchange. Of course, since your majesty is the one who caused the whole mess, you were probably expecting something like Qc7 which you were cleverly planning on taking.

In short, think this scene would convince even the staunchest monarchist that a republic would be a better idea.

Realism: 1/5 For the life of me I can’t imagine how white’s pawns disappeared. Am I supposed to believe that black’s rooks just hoovered them up?

Probable winner: Genevieve. She seems to be the only one sensible enough to take a free piece when offered.

1. [Or do they? I never heard of a theatrical release, but I’m no expert in the matter.] ↩
2. [Although it is at one point referred to as “ballet music”. This does not make me very optimistic.] ↩
3. [I have to use his title, because we never get to know his name.] ↩
4. [Diagram made by Mattel this program.] ↩