I have remarked before that, as the number of episodes in a given television series tends to infinity, the probability of chess appearing at least once, perhaps even in an important role, approaches one. Therefore, since House ran for eight seasons, totalling a shit-ton of episodes – as it is usually expressed in the highly specialised lingo of the experienced chess-in-popular-culture blogger – it stands to reason that there will be some chess I can talk about somewhere, and that is precisely what I’m going to do today. Let’s first get the formalities out of the way: House is an American television series about – as the title suggests – the maverick medical doctor House,1 played by Hugh Laurie of Blackadder and Jeeves and Wooster fame. He is a genius, which apparently means he’s good at diagnosing obscure illnesses,2 and a huge jerk. In the penultimate episode of the third season, he meets his match: teenager Nate is equally genius and equally jerkish. 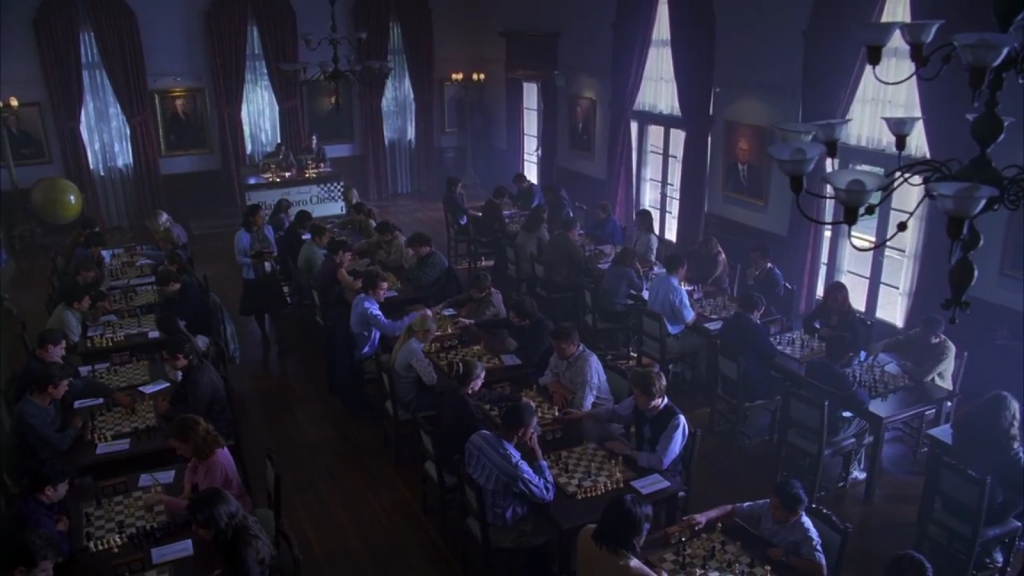 Nate was playing in a speed chess tournament where he collapsed after beating his opponent (first on and then off the board). Then he is brought to House’s hospital and attention, where the usual bickering of what could be wrong with him starts.3

But before all that comes to pass, there is a nice shut taking us along a row of boards at the tournament. The first board we see completely is the one neighbouring Nate’s. The most unrealistic thing is that all players seem to have score sheets at hand, even though this is a speed chess tournament. Of course, some players want to write down their game after a round, but in my experience this is a rather small minority. This board, which is utterly irrelevant for the rest of the episode, shows the following position:4 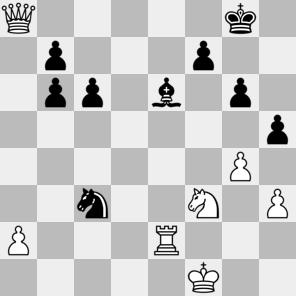 which is only remarkable in that black is still playing. I understand that the threshold for resigning is higher in blitz, but, come on, this is ridiculous! You’re down an exchange and a queen for a mere three pawn; you can give up with a clear conscience.

Then we get to Nate’s board and, oh my. Nate starts talking. Not even whispering, full volume talking…

Nate: So, you want me to explain how you just lost or do you want to stare at the board your full [checks clock] three minutes, cling to hope?5

…and not one person shushes him! Something like that has a good chance of getting you kicked out of a tournament. There goes any shred of believability this show might have had. 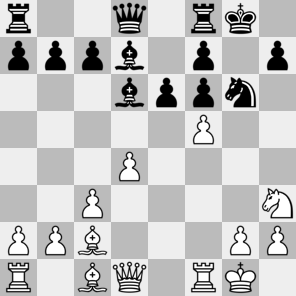 Nate falls prone because of a splitting headache, gets taken to the hospital, twenty possible diagnoses are suggested, yadda yadda, long story short: House decides he has to see what happens to Nate under stress, and what better way to stress him than by playing chess?

Finally, someone is talking some sense on this show!

And Nate, in true Nate style, continues to be a useless twat. For this to be a Sicilian defence, white would have had to have played e4. They keep talking while playing, but their talk is not chess-related and therefore of no value to us – until they reach this position: 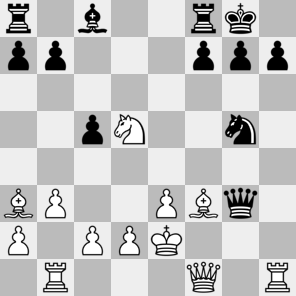 Now Nate gets a seizure. At the end of the show, when House has inevitably found out what the real problem is, he comes back to their game:

House: And I wouldn’t have taken your bishop. I’d have moved my queen to d6, defusing the threat, then rook to e8 attacking the king’s pawn. I’d have lost the exchange, but won the game.

Now that’s just plain nonsense. He wouldn’t have lost the exchange, he would have been down a full piece. And Re8 “attacking the king’s pawn” is about as pathetic as a threat could possibly get.

Nate: I know. I was bluffing.

What?! Every time I think the stupidest thing possible just happened, they up the ante again. Fortunately, they finally leave our noble king alone, but the episode nevertheless ends on a tragic calamity: Nate survives.

Realism: 4/5 The game6 looks more or less reasonable with the major exception of 8.Rb1, which serves no purpose except to give black a tempo for free.

Probable winner: Probably, Nate lost on time as he was busy having a seizure.

1. [To me, “doctor House” sounds like two small children quarrelling about what to play, but that might just be me.] ↩
2. [Perhaps even better than a computer.] ↩
3. [Spoiler: it turns out he plays the Bird!] ↩
4. [If you’re suffering from a lack of diagrams in your life, I gladly prescribe this tool.] ↩
5. [It’s got to be a pretty nasty disease Nate’s suffering from if it causes him to speak so ungrammatically.] ↩
6. [Which was constructed and posted to chess.com a long time ago. Unfortunately, that thread does not seem to exist anymore and I did not write down the poster’s (screen)name.] ↩