Unless you are a connoisseur of the graphic arts, the name Leon Kelly probably doesn’t mean much to you, so a short biographic note seems in order. Kelly was a twentieth century painter from the USA whose works are on display in such museums as the Metropolitan, the Whitney, and the MoMa – but he has nevertheless produced some pretty good stuff. According to wikipedia, he was active in cubism at some point, as well as in abstract art and realism. Today, however, we are featuring a work from his surrealistic period called The plateau of chess. But that becomes immediately clear once you see it: 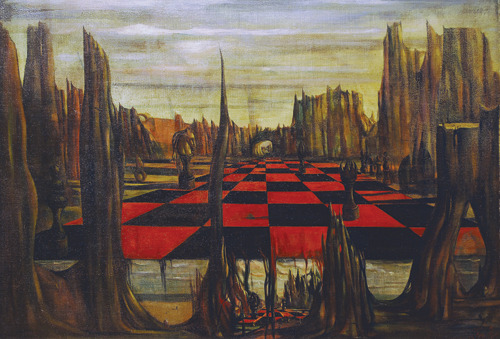 You cannot get much surrealistic than this! It is well known that a plateau is on a higher elevation than the surrounding land, yet the flat land in this painting is surrounded by tall, jagged cliffs. It seems more like a valley cut out in the land by a river long before anyone could ever wonder how this could be a plateau and how it could have formed at all, thereby making sure said river couldn’t get too self-conscious about its workings.

But of course this is not were the surreality ends. What’s with the rock/tree hybrids in the foreground? Is that a perfectly straight river right next to the board or is it a second sky? Who on Earth plays on a black and red chessboard? Or with pieces that are neither Stauntons nor a common pre-Staunton format? 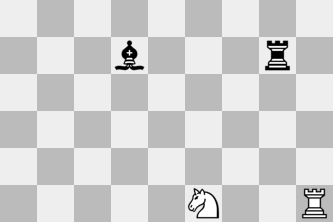 I believe this is the position on the board, but I’m not sure at all. The pieces on i1 and h5 might very well not be rooks at all; I mainly based my identification on their height. In fact, I’m not even sure they’re the same piece. I’m also not sure the piece on h1 is a white one. It looks like it, but it’s not very convincing.

And that sums the whole painting up, really: not very convincing.2

Realism: -/5 The position is blatantly illegal and the board is not an actual chess board. What other score could I possibly give? Surrealism is 5/5, though.