Now this is something you’ve probably heard of. In the eighties and nineties, Madonna was perhaps the biggest superstar in all of pop music. In 1998, she released ray of light, which became a worldwide hit. Of course, a music video was made as well. The text consists mostly of the singer claiming that she feels like she’s just got home, which hardly seems to warrant writing a song about. The video is a mishmash of different backgrounds speeding by while Madonna is simulating a seizure in front of a green screen. This all seems very boring, but then suddenly a chess board appears and I got interested faster than a ray of light.1 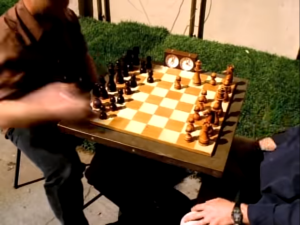 We never get to see the faces of these worthies and I suspect this has been done on purpose to let them preserve at least a small portion of dignity. If so, it was a highly necessary precaution: just look at the screenshot: as per usual, the board has been set up wrong and the kings and queens have swapped places. A white pawn is missing from the set; this has been dealt with in the highly original fashion of putting a pawn on the border between g2 and h2. Then the real horror started: white apparently opened 1.f4, which is bad enough but small beer in comparison with black reply of 1. … f6. White answered 2. Qg3 and in the picture above black is about to play 2. … a6, which is frankly ridiculous, and then we finally get some knight development: 3.Nf3 Nc6.

A very quick cut later, we see the following position on the board – and, yes, I am absolutely sure it is correct, modulo the fact that a1 is a white square.2 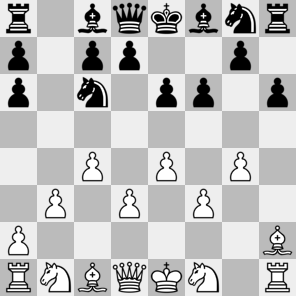 Well, things haven’t gotten better. The white pawn that was in a g/h quantum superposition has collapsed, probably under peer pressure to make for a nice looking pawn formation. His black colleague from b7 must have sidestepped to a7 to make way for the bishop. It’s not a bad move per se, but it is an illegal one.

Something else has been going on: white’s bishop from f1 has changed colour and has ended up on h2. Somehow the knight from g1 has taken its place and the queen finally found her home square of d1. Black, too, has brought his king to the right square, so both kings must have waddled about a bit already. But now they feel like they’ve just come home.3

Realism: 0/5 I was seriously tempted to give a -1. Not only is the position illegal (there is no way white’s pawn could have promoted, as that would require at least one capture and no black pieces are missing), but even without that the diagrammed position could never result from the one in the screenshot.

1. [This song was released in 1998, one measly year before Vestergaard Hau et all published their famous paper on light slowed down a speed slower than a 2CV’, makings the metaphor slightly obsolete.]↩
2. [I got ourselves a universe (of chess diagram editors).]↩
3. [Incidentally, I quoted pretty much all lines of the song that are sensible. I am half tempted to start a second blog complaining about nonsensicality in pop song lyrics. For the call of thunder threatens everyone? Waiting for the time when Earth shall be as one? What the hell? It already is one, you nincompoop, whence we call it the Earth.]↩