By: Nikolaas VerhulstPosted on December 11, 2018

IJzendijke – who can honestly claim to ever have heard of the name? A small Zealandian townlet, little more than a hamlet, tucked away near the Scheldt in the Dutch bible belt, with a mill, a chapel, a pond, and a square with a statue adorned. It depicts prince Maurits who, though the rain may pour its saltless tears on his face, will always remain unfazed.1 Below you’ll find a picture of this stern-looking figure, as he fights off the Spanish horde on the sixty four squares of the board. But after that I will stop rhyming, as my interest in that’s declining.2 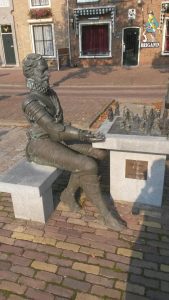 This statue was ordered by the local government to commemorate the capturing of IJzendijke in 1604 by prince Maurits van Nassau, who led the Geuzen in their war against Philip II from Spain. The position is constructed with the express purpose of symbolising the Eighty year’s war in general and the capture of IJzendijke especially.

For example, the white bishop on g5 is depicted as a man holding the head under his arm and apparently stands for Johan van Oldenbarnevelt, but for all I know it might just as well be the count of Egmont, whose beheading played an important role at the start of the eighty year’s war.3 The only thing I know for sure is that he’s the only white piece in danger. The rook on h8 is supposed to be IJzendijke, which the white forces of prince Maurits are about to capture. But maybe I should not be saying all of this without giving you the diagram, so here it is:4 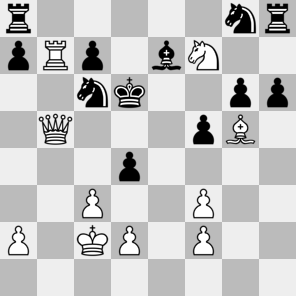 Unfortunately, as is so often the case in modern art, realism and beauty have been sacrificed on the altar of symbolism. It is very unclear what piece was taken on f3 and what on earth is was looking for there. Somehow, white has won a queen for rook, knight, and pawn, but he has just went astray: whatever his last move was, he could have mated in two moves by Qxc6+ K(x)e5 f4#.

Is this a subtle hint by the creator? Is he implying that prince Maurits should not have captured IJzendijke? Was there an alternative attacking route he could have taken which would have led to the capture of king Philips II of Spain, or perhaps the Duke of Alva? Should he have headed straight for Brussels? No doubt there is some blog somewhere on the internet dedicated to answering just this kind of questions, but alas! it is not this one.

Realism: 3/5 Possibly, maybe, perhaps this position could occur in a game between two absolute patzers. That means it’s head and shoulders above our usual subjects and therefore earns it a 50%+ mark.

Probable winner: Maurits van Nassau; he’s about to get a massive material advantage with a crushing attack to boot.

1. [In case you’re a dunce: it’s for he’s made of bronze.]↩
2. [Also, my rhyming is pretty horrible.]↩
3. [And as inspiration for a play by von Goethe which in turn led to a van Beethoven composition, the overture of which is rightly famous.]↩
4. [Carved out of zeroes and ones by a careful chisel.]↩