CIPC #99: The supersizers eat… the fifties

By: Nikolaas VerhulstPosted on December 18, 2018

I have a rare psychological condition were I have an immediate antipathy against almost anything with punctuation in the title.1 Some things – like periods, colons, and apostrophes – usually get a pass, but if there is a question mark, an exclamation mark, or, as in today’s subject, ellipsis, I immediately become suspicious. How is this questionable? Why does this need to be exclaimed? What has been ellipsed? But I have to grudgingly admit that the show is better than its title. It is about food in different periods of history and this particular episode deals with the fifties. The hosts Giles Coren and Sue Perkins relive the experience of a middle class British family in one of the early holiday camps that sprang up everywhere around that time. In the garden, there is a chessboard. 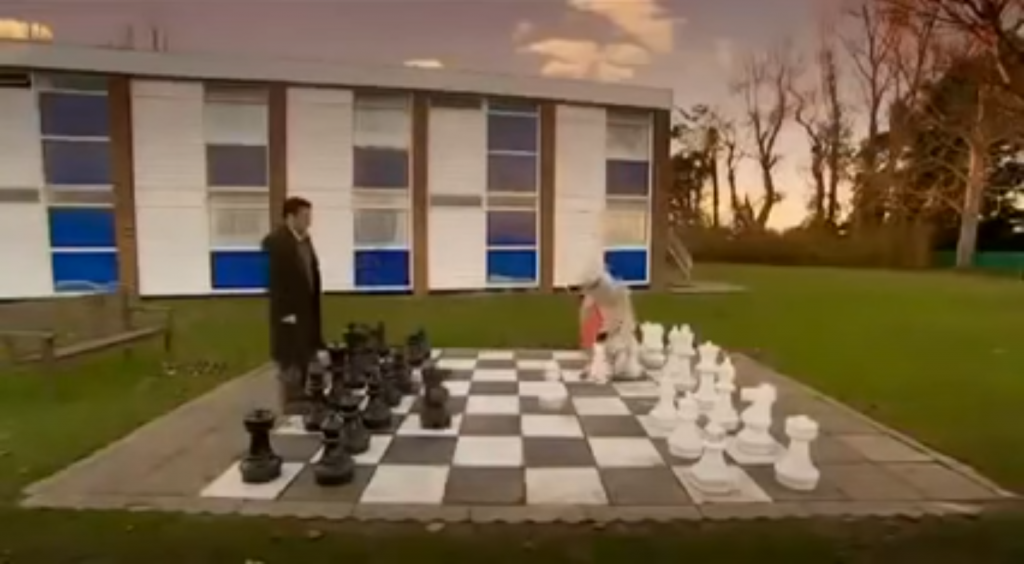 And then a miracle happens: the chessboard is set up correctly! Unfortunately, it seems like this effort took all the filming crew’s energy, because it starts going downhill fast. Sue, who is playing white, starts with 1. d4, which is still okay. Black answers 1. … Nc6,2 which is already slightly suspicious.  2. e3 follows, then 2. … Nd4 and Nf3 – and then the madness starts. Suddenly, the game turns into a real time strategy game instead of a turn based one. Giles starts hauling his queenside pieces up the board, while Sue takes the d4 pawn and resolutely marches forward, finally conking the black king on the noggin with it.

But this is only the prelude! After this unorthodox attack on the king, both players keep violating the most basic rules of both chess and common decency, moving pieces around willy-nilly in a what very much looks like a coordinated effort to be as obnoxious as possible to honest chess-playing folks. The apex of this boorish behaviour, the savage apotheosis, the terrible coup de grâce comes in what is probably the following position:3 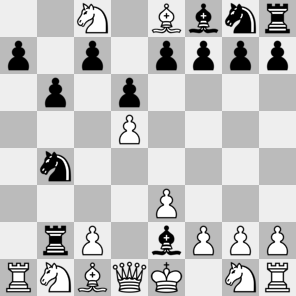 where Sue straight up kicks her defenceless little d5 pawn! After this final barbaric act, the perpetrators walk away, leaving the poor pieces to recover from this traumatic experience on their own.

This is where I would usually discuss the various aspects of the diagrammed position and try to assess its overall plausibility, but there is no point now, is there? Obviously there should be a black king on the board. Clearly the black rook could not legally reach b2. Of course, the position would still be uniquely ludicrous without these two errors; especially getting the bishop from c8 to make way for the knight without blocking its access to c8 is not a completely trivial task. I think I’ll stop here, to quote Andrew Wiles, and I take comfort in the knowledge that next week’s episode cannot possibly be worse.

Realism: 0/5 Even if I wanted to – and I most definitely do not – I could not give more any points, for the brutal behaviour shown in this show should not ever in any way be condoned.

Probable winner: The international criminal court in The Hague which just got job security for quite some time.