By: Nikolaas VerhulstPosted on December 25, 2018

As the number of blog posts you’ve written increases, the speed at which you encounter nice, round numbers unfortunately decreases, so you have to savour the occasion. What better subject, then, for this memorable occasion – a square followed by a prime! And it’s Christmas! And it’s the last post of the year! – than a dime-a-dozen mediocre Christmas comedy in Italian from the early nineties that everyone has forgotten? A capital idea! And nothing fits the bill as well as the critically ignored Vacanze di natale from 1991, a movie so obscure that, at the time of writing, the English Wikipedia doesn’t even have a page on it.

The most remarkable thing about this film is how god awful it is. This is exacerbated by the fact that it’s a comedy. If an adventure movie is bad, you can still laugh at the ridiculousness of the action scene, if a horror movie is bad, you can still get some enjoyment out of the stupidity of the characters (or perhaps the writer or director), but if a comedy is bad, that means that the jokes fall flat,1 the dialogue is bad, and the whole experience is toe-curlingly annoying. Such is the case with our subject for today.

The plot, insofar as this adjective is applicable, revolves around the guy on the left in the image above. His name is Mariotti2 and he is an extremely rich businessman. As the picture suggests, he is a long time friend of Sabino, the oldest waiter of the hotel were almost the whole movie plays. In the screenshot above, Sabino has just opened with 1. Nf3.3

Mariotti: Sabino, for how many years have you been opening with the same move?

The game continues with 1. … g6 2. g3 Bh6 3. Bh3 Nf6 and then gets interrupted by a call from the president, who’s asking for a recipe. Unfortunately, that’s all we see of the game, so the last position preserved in history is the following:4 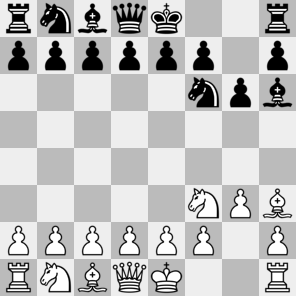 After the diagram, there are usually some closing remarks about how the position could have come about, but as we have perfect knowledge here, that point is moot. Which is a nice word to end a year’s blogging. Moot. It’s got a sort of woody quality to it. Moot. Moot. Much better than newspaper or litterbin.

Realism: 4/5 Bh3 and Bh6 are both rather strange moves, but I can see two people who always play against each other coming up with some kind of off-beat but not completely bogus system like this.

Probable winner: Very hard to say. As both players apparently know each other well and as the last position we see is completely symmetrical, a draw seems like my best bet.

1. [Often literally in the case of slapstick.]↩
2. [A name which might be familiar to our chess aficionados.]↩
3. [Freely translated by your (slightly befuddled by the Italian) servant.]↩
4. [When you go on Christmas holidays, be sure to bring your diagram editor with you.]↩