Suppose for a moment that by some strange twist of fate you end up in Bremen for a day or two. Maybe the Deutsche Bahn has stranded you there, or perhaps the norns have dropped a stitch somewhere – whatever. You go to see the Bremen town musicians, you walk through the Schnoor, hoping against hope that something noteworthy will be visible around the corner, you marvel at the ugliness of the Bürgerschaft building. In a last ditch attempt to keep busy you go to see the windmill. But then? What then? You will have to go to Universum. And you might encounter this: 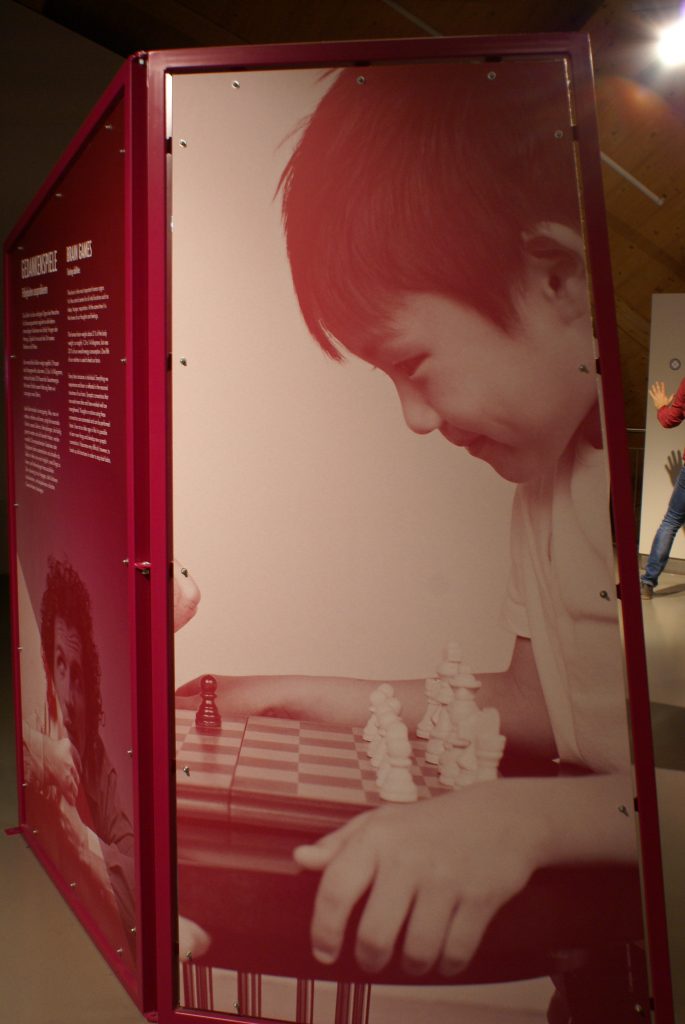 Universum is a museum-like, well, thing which is situated in a spaceship-looking building in the north of the city. The idea is that you, as a visitor, can do all sorts of small experiments or play around with some cool gadgetry, like an erosion bed, an earthquake simulator, or a chair of nails. They also have a small corner dedicated to brain games, which is announced by the panel pictured above.

Obviously, I cannot, like I usually do, provide a reconstruction of the position, because most of it is out of frame, probably hiding in shame, feeling dirty for ever having been depicted for in such a disgraceful display.

Clearly, the board has been set up wrong, but that happens in about half the cases I review. More interesting is that black seems to have started. With 1.g5, no less.1 That certainly would explain the kid’s smug grin: it is quite possibly the worst possible first move. Of course, it is also possible that black did not start. In this case, the game must have went something like 1.Nf3 g5 2.Ng1 which is a serious candidate for stupidest game on my site.

For the longest time, I thought that was it and this would be the whole post. But then, in a rare flash of inspiration, I came up with a theory: they’re playing a Fischerrandom blitz and, by pure chance, white ended up with the normal piece configuration.2 Relying on his normal opening knowledge, he played 1.Nf3 but after black’s reply 1. … g5 he noticed that this pawn was protected because black had ended up with a rook or queen on g8. Not knowing what to do, he retreated the knight to g1, laughing at the sheer ridiculousness of the situation.

Of course, even this doesn’t explain the whiteness of a1.

Realism: 0/5 In Fischerrandom, white and black are supposed to play with the same starting position.

Probable winner: Basman, I don’t believe some random kid can beat a grandmaster.

1. [Which leads us to conjecture that Basman is hiding just out of frame.]↩
2. [For the longest time, I didn’t realise that this was possible, but nothing seems to rule it out. In fact, this would mean that every normal chess game is also a Fischerrandom one.]↩