By: Nikolaas VerhulstPosted on November 7, 2017

Received opinion has it that chess originated in India, slowly evolving as it spread westwards from the original chaturaṅga into the modern version that is played by thousands all over the world. The game was brought to Europe through contact with Persia, so it is not surprising that when a tale from one thousand and one nights is turned into a movie, chess turned up. It is also not surprising that Disney would make a movie out of such a tale. To make a reasonably short story fit in one paragraph, there is a chess scene in Aladdin. Here’s a still shot: 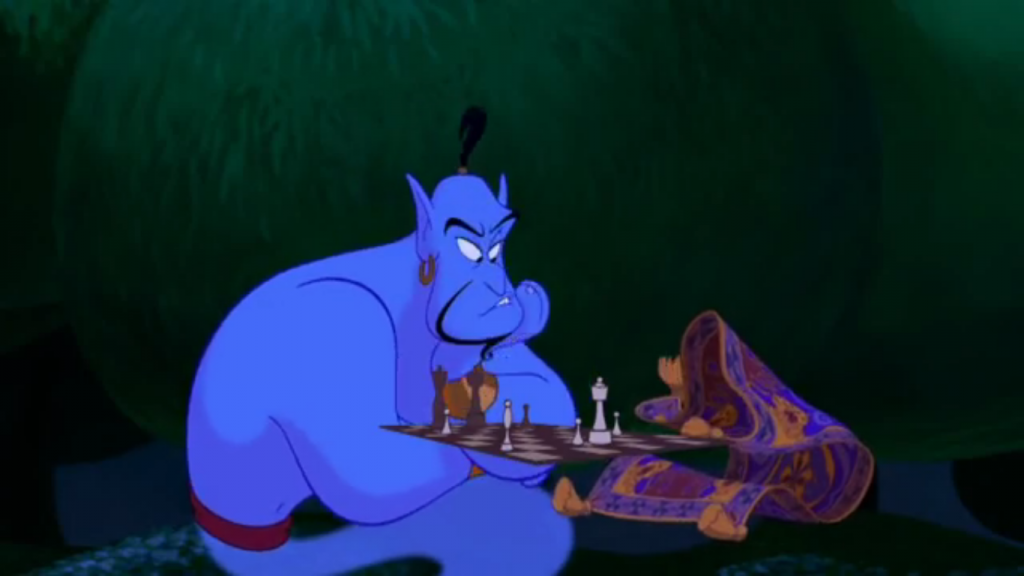 A blue genie and a sentient magic carpet are playing chess on a flying board and still the most supernatural thing around is the position on the board. But before I deal with that, I want to moan about the position of the board. When two people – supernatural or not – are playing a game of chess, they normally sit in front of one another, not at a ninety degree1 angle. This peculiar seating arrangement and the fact that there are so few pieces left, make it hard to tell whether the board has been set up wrongly. One might be tempted to guess that the carpet, who is playing white, has 1st rank right in front of him and that the genie sits next to the h-file, but not so. I have proof: look at the rightmost pawn. It is clearly on the board, which means that it must be on either h4 or a5. Ergo: the board is indeed set up wrongly.

That’s already a rather dubious start, but things get worse. Let’s have a closer look at the position at hand assuming, which seems most likely, that the aforementioned pawn is on h4. Here is what I think the position is – or rather, what it would be if the board had been set up correctly:2 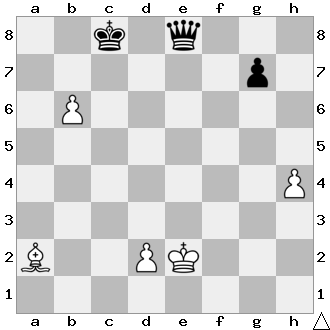 I think this is a reasonably good guess. Let me make my case: the smallest pieces are almost certainly the pawns, if for no other reason then simply because white has three of them. The tall piece with a nob on top, must be the kings, since it’s the only other piece both sides have. The other tall piece black has, is then probably the queen, or, failing that, a rook. This leaves us with the slender man3 on a2, which is more than likely a bishop.

Okay, let’s assume the position is correct. It’s not too bad is it? Black is a queen up, but it is not unreasonable that white plays on a bit, perhaps hoping to somehow eliminate black’s g-pawn and build up a fortress. That’s all true, but there’s context. Oh boy, is there context.

And so the carpet does: he takes black’s queen with his king! Understandably, the genie did not see that coming.

Genie: I can’t believe it! I’m losing to a rug!

Yes, because he’s cheating. But the genie deserves nothing better: the r-word is a racial epithet which is offensive to many carpets.3

Realism: 2/5 If we ignore the fact that the board is set up wrongly and if we forget the carpet’s illegal move, the position is quite realistic, but I feel that’s like saying that, except for a higher altitude and a lower population, Mount Everest is like Paris.

Probable winner: The magic carpet unless the genie calls his bluff.

1. [Or π/2 radian.]↩
2. [My wish for a diagram was granted by this website.]↩
3. [Who has probably taken all black pieces.]↩
4. [How painful such epithets can be, is poignantly illustrated by Cauvin and Laudec in an authoritative series of publications entitled Cédric.]↩