Netflix original is one of those phrases which a mere twenty years ago would have been nonsensical, but which is now as common as the cold. The first such series, setting aside co-productions, was House of cards, a political drama which had its first season in 2013. It’s focus is on Frank Underwood and his shady shenanigans. It’s not really my cup of tea – a corrupt politician is a less appealing1 main character to me than a cataleptic caterpillar – but I seem to be in a minority when it comes to that: the series is hugely popular.2

I believe this is the first time I talk about someone playing with himself3 – and how fitting that the first person to do so should be a self-centred twerp. In the position above, he has just captured a black pawn on b7 with the queen. Where this queen comes from, I have unfortunately not been able to establish with certainty. The position seems to be the following: 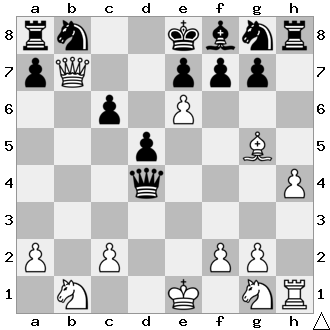 Although I have to point out that, once more, the continuity is messed up: in the top-down shots, there is a black pawn on h5 which is clearly missing in the picture above.

The position is a strange one. If one were to look at any 2×2 square, it would look quite natural: the white queen taking on b7 is a classical  theme, as are the black-coloured bishop protected by the h-pawn and the sacrifice of a pawn on e6 to keep the f8 bishop locked in. It’s just that all these pieces don’t fit together. Why is white’s rook gone, for instance, and what happened to black’s h-pawn? Plus, both sides seriously need some help developing.4 Still nobody bats an eye:

Frank Underwood: We never played chess before, have we?

Frank Underwood: You want me to teach you?

Doug Stamper: I should really get some rest.

Yeah, I don’t think this guy has a lot to teach.

Realism: 3/5 I guess it might be some demented sort of Caro-Kann.

Probable winner: Frank Underwood, if he can avoid stalemating himself.

ADDENDUM: An eagle-eyed viewer pointed out to me that the position with the black pawn on h5 actually occurred in a real game between Perunović and Lalith from the Dubai open 2009. The ‘demented Caro-Kann’ theory proved right.