By: Nikolaas VerhulstPosted on October 24, 2017

The faithful readers of this blog might remember how enthusiastic I was about Mystery science theater 3000. Aforesaid readers will, then, not be surprised to see MST3K make a second appearance. The episode we’re talking about this time spotlights a 1962 fantasy film. According to wikipedia, it is loosely based on the legend of St. George and the dragon, but I don’t know whether that’s really true. I, for one, have seen the damn movie and I am familiar with the legend, but I didn’t notice any non-superficial similarities. However, it was written by the notorious Bert I. Gordon, which explains the less than stellar plot. 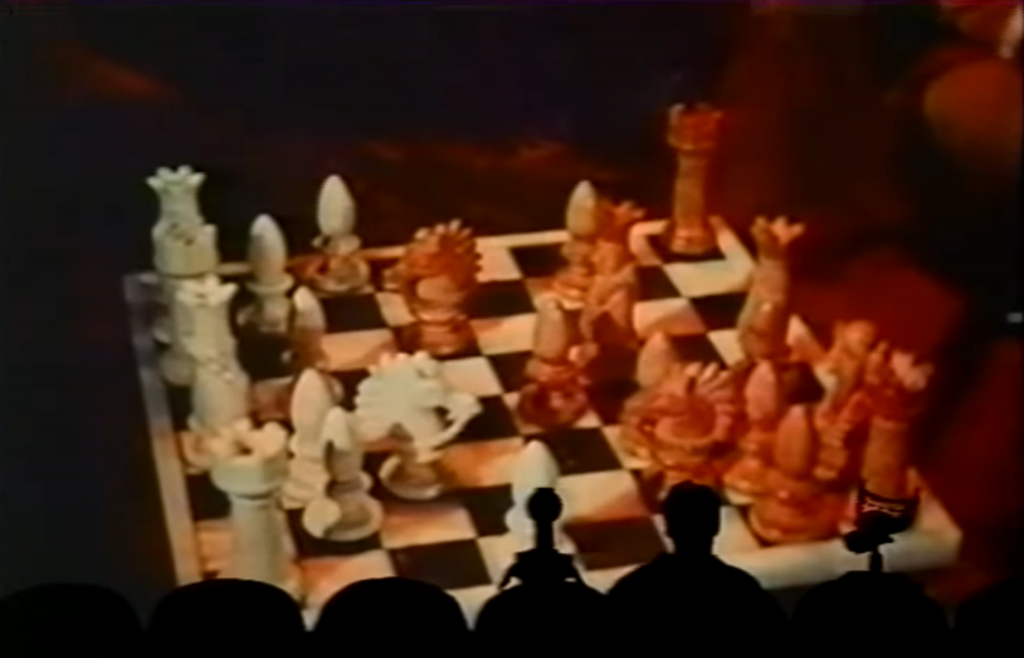 Playing with white is some two-headed dude,1 the black pieces are commandeered by a chimpanzee, so it’s not very surprising that the board is set up incorrectly. Both are very minor characters and their game is only on screen for a moment or two, but that’s enough for a quip or two:

Tom Servo: We’re well into the third game of the tournament. Ah, I see Snaggles the chimp2 has opted for the French defence.

Indeed, the French is precisely what a chimp would play. But do the facts bear out his claim? Do the position’s peculiarities align with the expectations associated to that peculiar opening? Let’s have a closer look:3 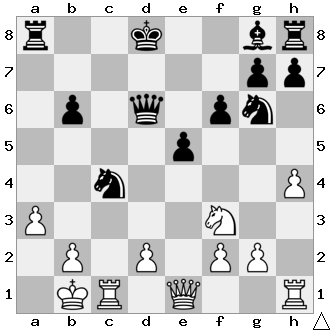 I’m not completely sure I didn’t confuse the kings and the queens, but that’s a clear no. It’s not impossible that this is the result of some twisted variation of the French, but it’s gotta be pretty messed-up for white’s d-pawn to still be on home base and black’s light-square bishop to be buried on g8.

We get to see exactly one move: White – that’s the two-headed guy – takes the knight on c4 with his rook. This costs an exchange, of course, and white was already two pieces down for the meagre compensation of a measly pawn. It must be very sad to be outsmarted by a chimp who barely looks at the board.

Realism: 2/5 It sort of looks like they took the white pieces from one game and the black pieces from another game, throwing them together into some monstrous chimaera.

Probable winner: The Chimp‘s the champ; he’ll chomp the chump.

1. [No, it’s not Zaphod Beeblebrox.]↩
2. [I wondered whether Snaggles was an actual chimp so I googled it, but the only thing it turned up is an article titled Zoo chimp makes NAZI SALUTE in shocking video. Ah, the internet.]↩
3. [Made by the magic board.]↩