By: Nikolaas VerhulstPosted on October 3, 2017

Long, long time ago, when October was but a sparkle in the eye of winter, I wrote a blog post about the music video for some pop song. Since then, I have not revisited the genre. Why is this? Two reasons come to mind. First, my knowledge of pop music is restricted to the vague notion that, at some point, some people from Liverpool became somewhat famous for there endeavours in this line of work. Second, pop musicians are perhaps not terribly attracted to the chess. I can only assume that something went wrong in their upbringing – the same thing that led to them become pop stars, I guess. Still, I stumbled upon a second entry in the short list of chess-themed musical videos: Rumour, by the aptly named Chloë Howl.1

This song is mainly famous for reaching fourth place in the Polish music charts. In other words, it’s not that famous.2 The music video shows a chess tournament under way. Some of the participants have white bandannas with a black cross on tied before their mouths which, I’m sure, has a deep and profound meaning. Or perhaps it’s the FIDÉ’s new dress code – who knows?

The video shows many boards, with each position more ludicrous than the next. Look at the one above, for example. The most logical sequence of moves to reach that position is 1.f4 f5 2.g4 g5 3.e4 which is so insane that even Basman wouldn’t play it. This alone would be enough to warrant a CIPC post, but before the viewer gets the chance to regain his equilibrium, the next position appears on screen:

I… I guess that’s an improvement? I mean, nobody is giving away pawns here and both players have wisely refrained form pushing their g-pawns far in the open field. Still, if I saw a tournament game open with 1.Nf3 f5 2.h4 Nh6, I’d assume with was the under-eight-years-old section.3

Now that’s some fast playing: in the time only a few moves were played on the two previous boards, here everything has happened. Unfortunately, in trying to optimise their speed, the players seem to have forgotten the rules of the game, because this position is plainly illegal: white is in check from both the queen and rook, which cannot be explained by a promotion since the rook is not next to white’s king.

We don’t get to see this position in a nice close-up like the others, so perhaps it’s not a bad idea to give a diagram here:4 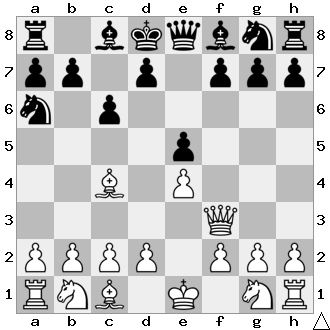 It is not completely clear that the white queen was originally on f3, but it is sure that it captures on f7. The woman playing black starts panicking, the guy playing white starts laughing boisterously, the game is over. This would be perfectly logical were it not that black hasn’t set the pieces up correctly! If black’s king had been on e8, Qxf7 would be mate, but now it’s not even check.

But wait, there’s more. The woman playing black is discharged of her duties and Chloë herself takes her place. She immediately commits a sin I have not dealt with before: she, commanding the black pieces, makes the first move!5 And it’s a6, of all moves. The rest of her game remains obscured, until we see her knocking over the enemy king with her queen. Not only is that an illegal move, it also messes up the continuity, for here’s what we see mere moments later:

Yes, that’s the white king right there. Still standing upright – on the wrong square, but let’s not be too picky. Normally, I’d try to reconstruct the exact position to then moan and groan about how unlikely it is to have arisen in any chess games, but I’m not going to do that here – I’ve already complained so much and there’s more!

This time I don’t even know who’s playing. The board is on screen for a second or two only, just enough for the hands on the right to make their way to the left, strewing chess pieces everywhere. Understandable, for were I confronted with a position where black’s king is invisible, I would be highly tempted to do the same.

Believe it or not, there’s more still! There is one more game, where  Chloë plays against the Main Antagonist. But that game is played with highly non-standard pieces and is not shown from close-by. Plus, I feel I’ve done enough for now.

Probable winner: Grand Ayatollah Ali al-Sistani, who wanted to forbid chess altogether and who, with this video, has found his best argument yet.

1. [Disappointingly, that’s just a pseudonym. Her real name is Chloë Howells.]↩
2. [Still far more famous than any chess historian, though.]↩
3. [Or that Hou Yifan was unhappy with the pairings.]↩
4. [Apparently made with this program, but perhaps it’s just a rumour.]↩
5. [Besides, she’s wearing shorts. She looks like a gypsy.]↩