By: Nikolaas VerhulstPosted on October 10, 2017

Which countries do you associate with comics? Perhaps you will immediately think of the American tradition, with superhero comics and Peanuts-style newspaper comics. Maybe the Japanese manga springs to mind first. Or perhaps the Franco-Belgian bande dessinée is your favourite. In any case, Argentina was probably not your first choice. Still, one of the most popular comic series from the sixties and seventies was created by an Argentinian author under the nom de plume Quino: La Mafalda, about a typical six-year old girl from Argentina. I don’t know much about the series, but it seems like Quino liked chess quite a bit. In the following strip,1 we see Mafalda on the right playing chess on of her best friends, Felipe.

My Spanish is as good as the next man’s if the next man is an anencephalic troglodyte, but I think what Felipe is saying means, more or less

Felipe: How was it again?2

which perfectly encapsulates a feeling that every chess player will be familiar with: calculating a variation really deeply, evaluating the result as positive, and then finding you’ve forgotten how the whole damn thing started. 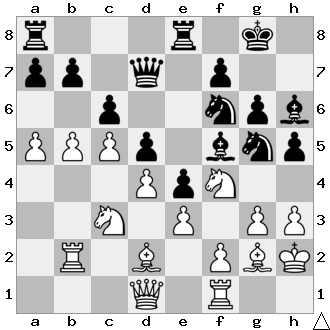 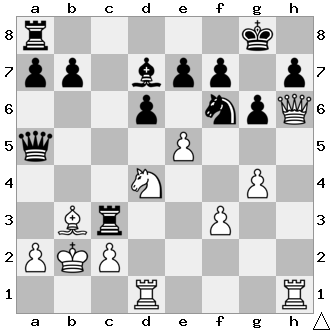 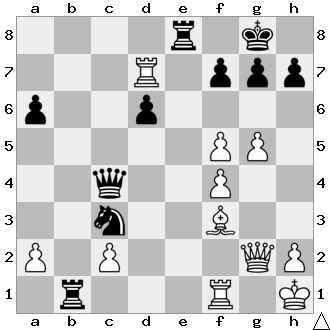 All three positions seems perfectly reasonable. The first one seems to hail from some Réti or Barcza opening. White probably has an edge, due to his activity on the queen’s side. The second one is indubitably the result of a Sicilian dragon. It seems odd that white is to move, though, since he can simply take the knight. With black to move, it seems a “dynamically balanced position”, as the cliché goes. In the final position, white is a pawn up, which, after trading rooks on b1 followed by Qe2, might prove surprisingly important.

So far, so good, but all this misses the point spectacularly: what sort of position is Felipe considering that these three completely different positions turn up in his calculations? Is this actually before the game and is he trying to remember his preparations? But even so, it seems strange that he has prepared both a Réti and a dragon. Plus, this explanation does not seem to be consistent with the position that’s actually on the board.

No, here is what I think happened: Felipe is not to move at all, but Mafalda is taking a really long time to make a move and Felipe got bored, so4 he is already thinking about the next game.

Realism: 3/5 I have to dock some points for the incompatibility of the three positions and white being to move in the second one, but everything else seems very logical.

Probable winner: Given that his opponent is six years old and that he himself is calculating how to play the dragon, my money is on Felipe.