About a month ago, the picture above made1 the rounds on social media. As I’m neither social nor a medium, I missed its original moment de gloire, but it was pointed out to me and I hereby, probably pointlessly, point it out to you. It is easy to see why it made such a kerfuffle: should we praise the dedication to the game even in the absence of a board or should we admonish the absence of the board? Was the suspiciously suited suitcase meant to stand in as a board or was it an improvised solution to a problem caused by forgetfulness? All sorts of question!

.Also, these two guys are apparently pretty good at balling foot. Perhaps for some twenty odd people that, rather than the chess, was what attracted them. But for even people, it’s what’s on the bo — sorry, suitcase, that matters.

Obviously, the suitcase has the wrong dimensions. Presumably, they addressed this before the game started and designated an eight-by-eight section to be the board. Assuming they did this correctly, we find this position:2 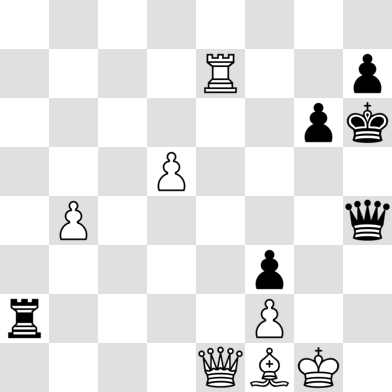 Hm. Maybe they really are pretty good players. This, at least, seems like a very reasonable position. Black has given up a bishop for the attack. White has tried to develop some counter attacking chances with the battery of and queen. In fact, if he’s to move he’s winning: after Qe3+ black cannot really avoid the trade of queens after which the extra piece will decide the endgame.

On the other hand, the orientation of the board suggests that the guy with the cart-rut in his hair has white and their body language suggests his opponent is to move. And in that case it’s going to be a draw, as the perpetual check is unavoidable after Qg4+.

Realism: 4/5 I’m honestly astonished. This may even have been taken from a real game.

Probable winner: Probably nobody, although it may be white if he is to move after all.3

1. […by a certain Annie Leibovitz and posted with a ridiculous mock-inspirational caption on Instragram. Because that’s how advertising works nowadays. Humph. I think I have to go yell at a cloud.] ↩
2. [Between some rolled up socks and the clock they didn’t use.] ↩
3. [He’s attacking more in this game than in the world cup, from what I heard.] ↩