After all these years, there are still British detective series that have never been mentioned on this blog. One of them is Taggart, but after today it won’t be any more. It is a murder mystery series set in Scotland. We catch the eponymous detective chief inspector Taggart in his early years, when the episodes were so long they aired in three sections and when the ideas were still quite fresh. Events in this episode are put in motion when an opera singer is accused of murder after her estranged husband’s new girlfriend turns up in a boat that, together with her, has been burnt to a crisp.

There are a few more murders, some blackmail, a portion of fraud, but the climax of the episode comes quite late during the episode when Taggart and his assistant, Livingstone,1 are puzzling over the motives and the possible connections between the killings. They do so, as normal people, over a game of chess.

The position is shown quite clearly. The one thing I’m not sure about is the identity of the piece on c5:2 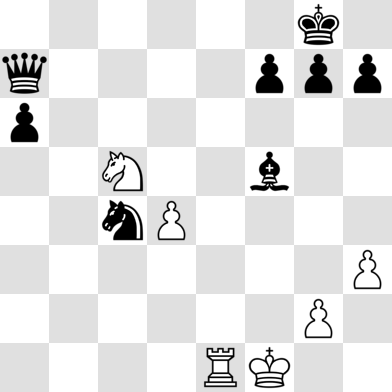 Taggart is playing white and, like many a real chess player, is toying with one of his pieces while they discuss the case. No sooner have they said all they had to say or he plays Re8, announcing mate. This takes his younger opponent completely by surprise. What I suspect happened is this: the black queen was on a8 and a white queen was on c7. Black was an exchange down but had a pawn as compensation. Then white played Qa7. The plan was probably to take the a-pawn after Qc8 or Qd8. Instead, black fell into the trap and took the white queen.

Obviously, sacrificing a woman gets the chief inspector’s attention. His reaction is not as swift as you’d like, but it’s not necessarily a bad idea to double check your evidence before bringing a case to court.

Realism: 4/5 I can very easily see a position like this occur in practice. There are a few odd details, like the king on f1, but these happen all the time in actual games.

Probable winner: White. The mate is pretty final. Plus he’s the boss.