January ain’t over yet and we’re already on our second British detective series! That’s got to be some kind of record! Two weeks ago, we talked about Taggart for the first time, now we’re revisiting our old friend Lewis. For the fourth time already! The people involved seem to have a thing for chess, which is very laudable. But they seem to have a thing for rather dubious positions, which is less so. Did they do better on their fourth attempt?1

Plotwise, probably not. It’s about Zoe Suskin, a precocious young girl — hence the title — and the people that drop dead around her — hence inspector Lewis . We have to wait a very long time, but at the very end of the episode, when all evildoers are either dead or incarcerated, we get to see Lewis’ assistant Hathaway play chess with the young girl in question.

We see a very clear close up, in which the position is as follows:2 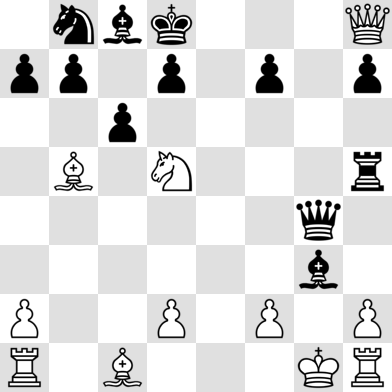 but there are a few seconds before where we can see the board from further away — and shady things are going on here. We see white take take a rook on h8 with her queen. She puts the captured piece next to the board, closer to herself than the previous victims. Yet, in the close-up shot, the rook is further away from her! What’s worse, in the faraway view, white’s queen’s side’s pawn structure is still intact, the h1 rook is on e1 instead, there’s still a white pawn on g2… In the sixth season of Lewis, I expect they’ll have to investigate the sudden death of the continuity director during the filming of this episode.

Hathaway, who is playing black, interposes with his queen on g8, even though resignation was obviously a superior move.

I know, lady, but no one else wants to blog about chess in popular culture.

Realism: 0/5 The position itself is not illegal, but the white queen taking a rook on h8 is. That rook could never have gotten there because of the bishop on c8.

1. [Does anything ever get better on the fourth attempt?] ↩
2. [By now, the only guest that has appeared more on this blog than Lewis is this diagram editor.] ↩
3. [This is a really weird place for this comment. Why would you tell someone they’re rubbish right after they’ve made the only legal move in the position? It would make much more sense one move earlier, before Qxh8+.] ↩