CIPC #290: The first spaceship on Venus

Sadly, I will not be discussing an actual spaceship in this post. It would be astonishing, wouldn’t it, if a chess scene were painted on the first spaceship to Venus, probably with the board rotated and a black pawn on the back rank. But, alas, The first spaceship on Venus is just a movie. It was released in 1960 under the title Der schweigende Stern. Presumably, when it was translated, someone finally realised that Venus is not a God damn star!1 But in avoiding Charybdis they ran smack-dab into Scylla: the events in the movie are set in action by a spaceship from Venus crashing on Earth. Consequently, the spaceship featured in this film, which goes in the other direction, is not at all the first one on Venus. You live in a land of lies, movie!

But it’s not all bad. Orloff,2 one of the people sent to Venus, is apparently a connoisseur of our noble game. A good twenty minutes into the movie, he can be seen at the board playing black against Omega; a small robot, made by another member of the crew. Since Omega apparently has no piece-manipulation equipment, its moves are executed by Ogimura, yet another crewmember.

The director, the apparently renowned Kurt Maetzig, gives us a very clear view of the game:3 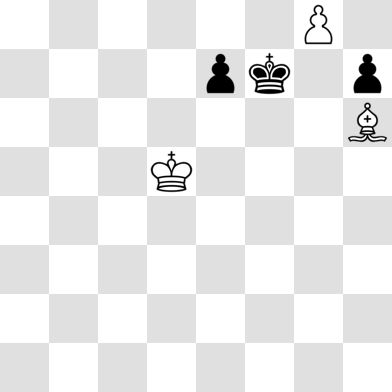 The pawn on g8 is there illegally, but presumably white just played g8Q+ and they didn’t bother replacing the pawn, as it was doomed to be taken immediately. When that happens, white goes Ke6. This rather pedestrian move elicits an enthusiastic reaction from Orloff:

Orloff: It’s amazing! He plays his endgame wonderfully. I thought that I had got him, but you see he’s put his king on e6 and I’m forced into the corner at h8.

True enough. Although I’d argue this is more a matter of tactics than endgame technique. Then Omega announces its next move in a slow, metallic voice:

and that, ladies and gentlemen, is how you throw away half a point. If you take on e7 it’s not mate next move and in fact it will never be mate unless black helps a lot. What you should do is play king f7. Weirdly, that is also the move Ogimura executes.

She goes to complain to Omega’s creator:

Ogimura: If he only had a heart, he would let Orloff win once in a while.

Why, you conniving little minx! You beat Orloff! The robot was going to let him escape with a draw. But a heart is build into Omega and when it is later in the movie playing black against Orloff, things don’t look well for it: 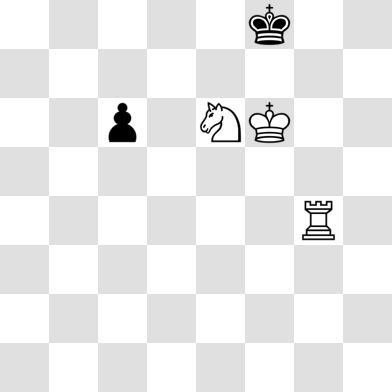 White has just given a check on e6. This severely limits black’s options and after a very brief moment, Omega answers Ke8. White proudly announces mate, but how this is accomplished remains unclear. The quickest I see is Rd4 followed by Rd8 or Rg8 followed by Rd8, but that’s still two moves! You cannot just say ‘mate’ and declare victory.

Otherwise, my next season will be great.

Realism: 4/5 The first one looks very plausible. White has a bishop for a pawn, but the conversion is not so trivial that black should resign immediately. The final tactic is kind of cute. The second one looks very logical, too. Black has played on too long, but perhaps a resignation feature has not been built into Omega yet.

Probable winner: Hell if I know. Mate ends the game, but probably not when someone else makes the move. What do the rules say about cases like this? The second one is clearly won by white.