We interrupt your regularly scheduled chess-in-popular-culture program to bring you an important message. Some of my diligent readers may have noticed this already, but I can now confirm it: this is a blog. Therefore, I am bound by the international laws of blogging and I have to make a post about computer generated art, preferably with a lot of oohing and ahing about how miraculously fantastic modern artificial intelligence is at making art. So I had a look at some websites where you can get computer generated art and I fed them some chess related prompts.1 I started by giving craiyon the most exciting one possible: “chess”.

That’s… disappointing. The good thing is that you get nine images at once, but they are all quite boring. The central one almost seems like a normal opening, but the white king seems to be flanked by two vaguely bishoppy blobs, instead of one bishoppy and one queeny one.

Undeterred by this sad showing, I went to nightcafé, and kindly requested a picture of “nineteenth century chess masters at their game”. This is what I got: 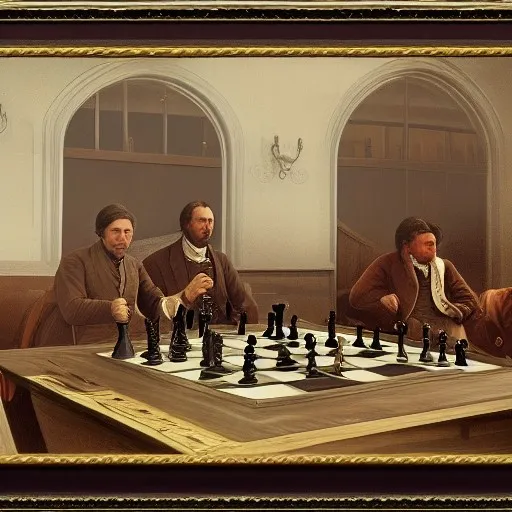 Note that I did not crop this image at all. I really got what seems to be a part of a painting. The clothing on the two figures on the left seems nineteenth century enough; but the rest is unsettling. The ridiculous five-by-five board, the overcrowding, the almost exclusively black pieces, the hairy potato on the right with his hands in his pockets —

MOVING SWIFTLY ON, we get to pixray. Inspired by certain recent non-events, I asked it to depict a “cheeky bastard cheating at chess”. 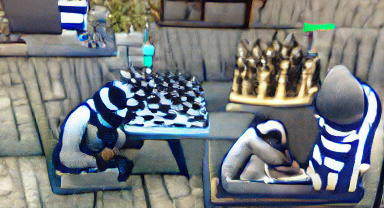 The AI does seem to vaguely understand what chess boards look like and it gets the idea that there should be pieces on them. There are some figures too which, with some effort, could be interpreted as human. The one on the right is hugging his knees, probably crying in shame at his cheating — or at the realisation of his being doomed to an eternity in hell playing the Benoni as black.2 Or maybe he’s cowering in feat at the big boulder with the green health bar.

The one on the left is sneakily checking his phone. This is probably the best detail any of these AI’s showed, but it may well be mine rather than its intelligence. That would be kind of cheating. The cheeky bastard!

Next up was wombo. This site requires you pick a style and I obviously chose realistic. After all, who would want an unrealistic depiction of “Anderssen’s immortal game of chess”?

Yes. “Realistic”. Because people often play on six-by-ten boards filled to the brim with pawns. Admittedly, for how massively stupid AI tends to be,3 it is quite impressive that the pawns are recognisable as such and that there are even some attempted coordinates on the bottom of the image. But essential things like empty squares and the chequerboard pattern are completely absent. In fact, it seems to think that, generally, white pieces go on white squares and black pieces on black squares.

Yes, it is sickening. But before I stopped I wanted to try one more prompt that is very near and dear to me. So I went to hotpot, typed in “idiot blogging about chess in popular culture”, waited until the nearest main sequence star went supernova and got this picture: 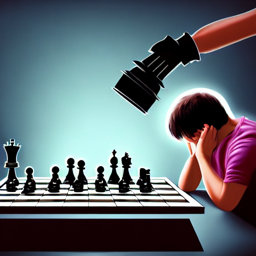