Australia! The land of weird, venomous animals, fairy bread, and TwoSet violin. I don’t think I have yet spotlighted any Australian television show or indeed any Australian culture at all. This is clearly a terrible oversight that must be rectified immediately. So today we’re going to talk about The doctor Blake mysteries, a mystery crime series about a doctor Blake.1 See where they got the title from? See? The series ran for five seasons between 2013 and 2017. It was supposed to go on longer, but the star of the series was accused of sexual misconduct and the production was suspended.

.Sexual misconduct also plays quite big role in this particular episode. It plays in a shoe factory, where Polish migrants work under terrible conditions. One day, one of those terrible conditions turns up dead. First it’s assumed to be an accident, but it soon turns out it was murder.

In response, our hero decides to play a game of chess. And the director shows the board in beautiful detail. For once, I can show you the board without the least doubt about the reconstruction:2 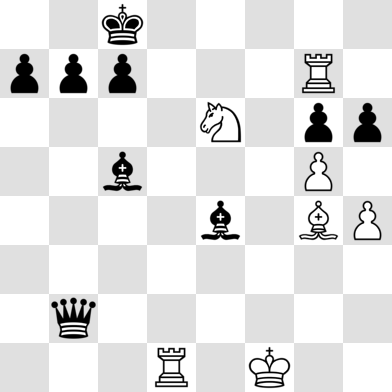 Doctor Blake is black here. If he also were to move, that wouldn’t be a problem: Qf2 would be quite acceptable for black. But, to his great misfortune, it’s white to move. And his opponent is.less than impressed:

With those words, he captures on c5 with the knight, announcing check. Some might question his own strategy, as he missed the Rd8 checkmate, but it doesn’t matter much. Black choose Kb8 which is answered by Rd8 checkmate, but the alternative Bf5 would have been no better in view of Rg8.

Doctor Blake, in a remarkable show of self awareness, agrees with his opponent’s assessment of his skills. And rightfully so. Hell, if he plays like that he might have trouble beating me.

Realism: 3/5 This one is not so bad. White seems to have shed an improbable amount of pawns while black hung on stubbornly to his pawns, but these things happen.

Probable winner: White delivered checkmate. He is kindly requested to give it its liver back.