CIPC #288: Ninja in the killing fields

Today, we’re going to talk about an obscure niche of pop culture you quite probably have never heard of: Hong Kong hack jobs. That’s not an official term, but it describes perfectly well what it’s about. In the seventies, martial arts movies had become hugely popular in the Western world. Some clever people in Hong Kong decided they wanted in on the action. But making movies is expensive! So instead of doing that, they took a bunch of discarded footage, cheaply filmed some extra scenes, and used the renowned cut-and-paste technique to produce movies they pretended were perfectly new and sensible.1

Probably the most prolific director in this scene was Godfrey Ho, although he used about a billion different pseudonyms. Some sources online claim that our subject for today, Ninja in the killing fields, was one of his creations but others contradict that claim and the real culprit has never been brought to justice.

Normally, I would give a brief synopsis of the plot at this point, but as this is a pileup of several unrelated movies, there is no plot to speak of. There is, however, a character called the ‘chase master’, and I strongly suspect that his title should be ‘chess master’ but got mangled in translation somewhere. Exhibit A supporting this theory is that, about an hour into the movie, the character in question can be seen at a chessboard.

Reconstructing this position was quite an ordeal. This kind of movies was not exactly filmed on the highest quality equipment. It does seem like a8 is a black square though, which is probably the highlight of this movie.2 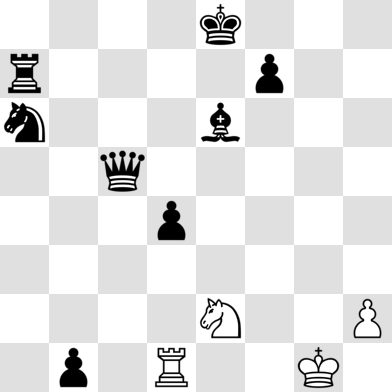 This is basically pure guesswork. Sadly, the piece I’m most confident about it the pawn on b1. There is a bunch of pieces on the kingside, but I suspect they are actually standing next to the board; presumably they have been taken3 and are now held hostage.

Things are looking bleak for them. The director didn’t even pay for a script.

Realism: 0/5 But it’s still more realistic than the — well, plot is not the word — than the occurrences in the movie.

Probable winner: Who know? Knowing Ho, the game is actually a nonsensical sequence of positions from unrelated games that were never finished.

1. [Admittedly, many big Hollywood productions make the same claims on equally dubious grounds.] ↩
2. [Admittedly, the highlight is still dark as the night.] ↩
3. [Presumably, Liam Neeson is about to avenge them.] ↩