When I first saw this stamp, I wondered where it was issued. It clearly says Guinea-Bissau, but why on Earth is there a big Finlandia logo then? I could understand it if the person on it was Sibelius, but it’s Ruy López! Why? Well, I’m still not entirely sure, but I think this Finlandia ’88 thing was some kind of philatelic exposition or convention or some such thing which was held — surprise, surprise — in Finland in 1988. But that leaves us with an even more puzzling mystery: why would Guinea-Bissau decide to issue a series of stamps dedicated to chess? It is not exactly a country known for its rich chess culture. In fact, at the time of writing, Guinea-Bissau is not even a member of FIDE. And yet it happened. In 1988, Guinea-Bissau issued a whole series of chess stamps.

And it wasn’t even the first time! In 1983, Guinea-Bissau had issued a series of stamps with as theme the history of chess. Was there some unknown chess enthusiast working for the Bissau-Guinean postal service?1 Who was it? Why did it lead to a bunch of stamps but no chess federation? Puzzling, baffling, mysterious, none of our business.

We’re here for the chess. The stamp itself shows Ruy López, but the accompanying souvenir sheet shows the board as well. Given the subject, old pieces are to be expected — but not like this! There were usually no elephants in European renaissance chess sets. On the stamp, the elephants are probably meant to be rooks, but those were always towers. Bishops used to be elephants, but mainly in oriental sets.

Also, the pieces are not nicely centralised in their respective squares. Humph.2 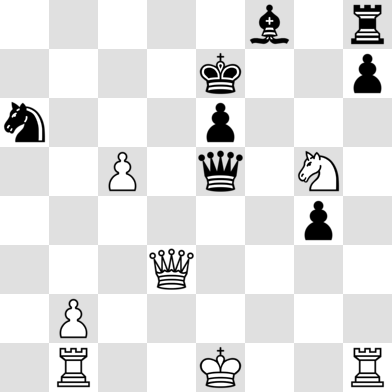 I’m pretty sure that, in my reconstruction, all the pieces are within one square of their actual positions. Most of the identities are probably correct, too.

Unfortunately, the identity of the opening is probably not correct. By al rights, it should be a Ruy López, but the pawn on e6 speaks against that.

Realism: 2/5 Nothing is massively out of place, but that’s the nicest thing I can say about this.

Probable winner: White is up an exchange, but this position is less stable than nitroglycerine.