There are certain fictional characters that one only starts to appreciate with age. Homer Simpson, for example, to a child seems like a boring loser. But as an adult one can appreciate that he has a loving family, a decent job, and a home of his own. Similarly, there are also characters which seem awesome to children, but are recognized by adults as the useless pipsqueaks they are. The prime example would perhaps be Ferris Bueller. Or perhaps it would be Dennis the Menace.1

I have to insert a small intermezzo here to spotlight one of those weird coincidences that are the spice of history. Dennis the menace — the one we will be talking about — is an American comic strip that started on March 12, 1951. On exactly the same day and completely independently, a new comic with the exact same title started in the UK. We’re also talking about something incredibly recent. In fact, it’s the most recent thing I’ve ever talked about. It’s from this year, goddammit.

Given the size of the picture and the closeness of the board, the reconstruction should not pose any problem. But it does. Instead of using elegant, normal pieces like decent people, they are using some ill-defined, ugly blobs. And of course they have the board set up the wrong way around.2 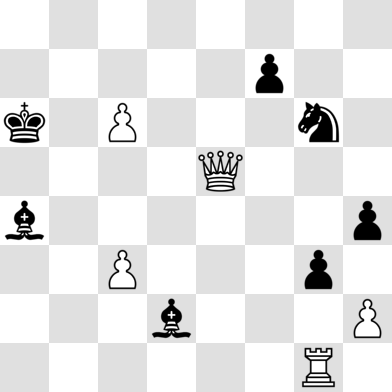 This is my best reconstruction, but I’m not proud of it. Almost all the pieces are similar, but no two look really the same. I’m pretty sure about the black knight, and I guess the piece on e5 is a queen, as it seems to have the typical queen crown. All the rest is guesswork.

But talking about the position is rather pointless. The big worry is what Dennis says. Really, Dennis? Maybe the problem is that you are slow as molasses, you impudent little sod.3

Realism: 0/5 I was tempted to give positive score because I cannot be sure the position is illegal, but this sort of obfuscation must not be encouraged. The zero is deserved.

Probable winner: I hope it’s going to be grandpa. I hope he beats the bejezus out of his blasphemous opponent. But, of course, there’s no telling. I can’t even make the pieces out.

1. [If kids thought I was cool, they’d have some fierce competition, though.] ↩
2. [One option my usual diagram maker is missing, is non-standard pieces, like the unidentifiable blob.] ↩
3. [Also, molasses can be faster than you’d like.] ↩