Long, long time ago, when music videos were a new thing, almost anybody could get some airplay. Even a rock band with a short, random name and ska influences that released a song about an impending third world war with an accompanying video featuring a skeleton feeding newspaper headlines to an ever-growing bomb. That band is Fishbone and that song is Party at ground zero. Of course, bombs devouring newspapers is not the sort of thing that would make me look, but, seeing as this song was inspired by the cold war, there is the obligate reference to the 1972 Fischer Spassky match. Now that raises some eyebrows.

I think the red suits are apocryphal and I’m sure that they had a clock in the actual match. Also, I have read several magazine reports and books about the match and none of them mention the players being paper cut-outs, so that too is probably a mere fabrication. And the pieces were surely not the wooden analogues of slenderman!1

But the meat of the matter is the position on the board. If that is alright, I can forgive a lot. And it should not be too hard to get this right. It would be very easy, actually: just take an actual position from an actual game of the actual match!2 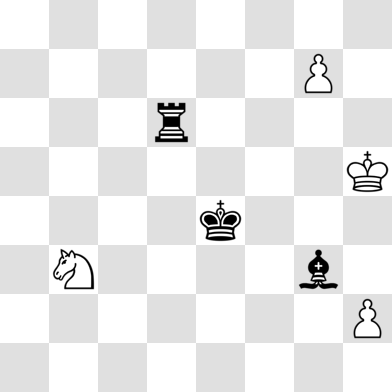 Of course, they did no such thing. Admittedly, I don’t know the games from that match by heart, but I think I’d be aware of this position had it occurred in one of them.

But you can’t expect Fishbone to be aware of positions of a match from fifty years ago. At most, they would know the games from the match Stockfish lost to Alpha0.

Realism: 4/5 This actually seems more or less plausible. Quite possibly, there was a rook on g3 while the pawn was still on g6. Black then took the rook and instead of recapturing, white went g7. This is reasonable, as black can’t save his bishop in view of the imminent promotion of the g pawn.

Probable winner: Nobody, provided it’s black to move. One way to keep the position would be 1. … Rd8 2. hxg Rg8 3. Kg6 Kf3, but throwing in a check with Rd5+ doesn’t hurt anything either. If it’s white to move, he obviously wins with 1. g8Q.