What’s the best newspaper comic of all time? Many will say it’s The peanuts. Some people might prefer Dilbert, or The wizard of Id. Maybe there’s even some deranged pop-art fanatic somewhere who mistakenly thinks it’s Garfield. I, however, maintain that it is Bill Watterson’s Calvin and Hobbes. By quite a margin. It is sometimes sweet, sometimes incisive, often original and usually quite funny. It deals with Calvin, a hyperactive six-year old with an even more active imagination,1 and his stuffed tiger and best friend Hobbes.Together, they live through all sorts of adventures, real and imaginary, and play all sorts of games.

One game they play quite often is some two-player variant of baseball. In this day’s comic, they have played a particularly rambunctious match which has left Calvin in a less than perfect physical state. Discouraged by this from further exercise, he makes the wise, but in his case probably unsustainable, decision to become an intellectual. As an intellectual in spe, he naturally plays chess.

This is a Sunday strip, which means that Watterson has a bit more space to work with than usual, but he used most of it to make the point that this was a particularly rough match. Consequently, he only has a little square left for the denouement. This means that he cannot give the chessboard in all the detail it deserves. The reconstruction was therefore a bit hard:2 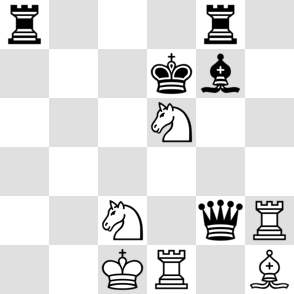 Unfortunately, the dimensions are correct; they are wrong. The positions of the pieces are also correct. Their identities, on the other hand, are probably wrong. The knights are more or less recognisable, but for all the other pieces I basically had to guess. It’s anyway irrelevant, as the non-canonical dimensions of the board guarantee a hard fail.

Then again, maybe they’re not playing chess but rather Calvinchess.

Realism: -/5 This is not chess. Maybe I shouldn’t even have spotlighted it. But it’s Calvin and Hobbes!

Probable winner: Who knows? I guess the score will remain Q to 12.

1. [He’s much more hedonistic than his famous namesake, but at times he shows a similar inclination to matters philosophical.] ↩
2. [Calvin is too lazy to play on an 8×8 board. If you’re too lazy to draw one yourself, use this.] ↩