CIPC #283: The black shield of Falworth

Which genres of movies are popular varies widely over time. Nowadays, the big thing are superhero movies, which didn’t really exist fifty years ago. On the other hand, westerns were huge in the sixties but you barely ever see them any more. Another genre that seems to have disappeared from the movie theatres is the knight’s tale. Robin Hood and Ivanhoe used to be big names in popular culture — but where are they now? The whole genre seems to have been absorbed by fantasy. Such was not the case back in 1954, when The black shield of Falworth came out. The story is very simple: a young farmer turns out to be the son of a nobleman who has fallen from race and with strength, courage, and skill fights his way back into the king’s favour. Not the most original plot, but effective enough.

Both the director, Rudolph Maté, and the main star, Tony Curtis, got Oscar nominations. But you are most likely to remember the actress playing the romantic interest: it is Janet Leigh of Psycho fame. Her character’s father plays a very important role, as he is a sort of benefactor to the protagonist. He is also a nobleman and as such he is contractually obliged to play chess. Almost an hour into the movie, he fulfils his contract and we get the scene you can see above.

In a serious anachronism, he seems to be using very abstract late nineteenth century or early twentieth century pieces. They also seem to have rotated the board, but as this is a medieval scene, I’ll let that one go. The reconstruction was not trivial. I did my best1 and this is what came out:2 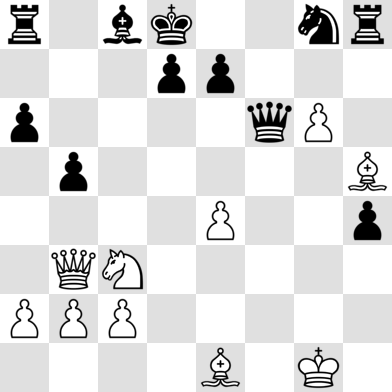 Well, that’s certainly a position. If you want to know what it’s like to go on an acid trip, just look over the position from left to right. In the beginning, everything looks fine. The queen on b3 is mildly unusual, but not really extraordinary. The king on d8 is slightly more worrying. Then we reach a desolate, alien landscape. The white bishop, lonely and lost on e1; the white king, bereft of all its pawn guards; the suicidal bishop on h5;3 ever starker signs that a madness comparable to Roland’s is setting in.

And then we’re passing mere Roland territory and it becomes a second Bedlam. There seems to be only one player. He is sitting at the white side, but he plays the black h-pawn to h3. Okay, maybe he is analysing his opponent’s options, but why would be he looking h3 of all moves? That’s probably the least critical move in the position! Why isn’t he looking at Qg5+, or some developing move like Bb7?

The most likely explanation is that intelligence is not a prerequisite for nobility.

Realism: 2/5 The left side is fine, the right one ridiculous.

Probable winner: Black is up a lot of material. And it’s in the title of the movie as well! That’s got to count for something.