If you are trying to sell toys in the low countries, a lot of your revenue comes in the weeks before Saint Nicholas’ day. So, obviously, you need good advertisement leading up to the big day. One way supermarket chain Lidl tried to get that sweet Saint Nick dough was by having a small leaflet inserted in local women’s magazine Libelle1 with their most attractive offers. They rightfully judged that no offer could possibly be more attractive than that of a complete chess set. For higher perceived value, some other games are included, but no one cares about those.

If it were up to me — which unfortunately and inexplicably it is not — I would come up with some really good position for the picture. Maybe one of those charming little Sam Loyd problems, or the moment right before Shirov’s Bh3, or some position from Anderssen-Kieseritzky. Perhaps, if I’m feeling a little too optimistic about the general public’s level of chess education, I would give a clever retrograde analysis problem.

What did the designers of this ad go with? Of course I made a reconstruction:2 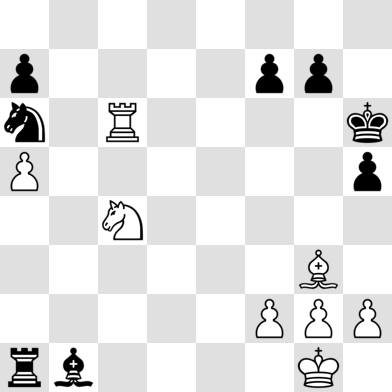 And, actually, this is something I am quite happy with! The position seems plausible enough. Only the black king on h6 seems a bit strangely placed, but I can see it ending up there somehow, trying to become active in the queenless middle game. And laying a devilish trap — that white fell for! Because black can parry the check by a checkmate (Bg6#), which is rare enough to be interesting.

But alas. The reconstruction is wrong. That’s not a king on h6, it’s a queen. There can be no doubt about it, as the black king is standing to the right of the board. So instead of a plausible and highly interesting position, we have a nonsensical mess.

Realism: 0/5 This is a very, very sad miss. It could have been so pretty.

Probable winner: Black has mate in one, a big material lead, and no king that can get mated.

1. [Libelle is Dutch for dragonfly. Why you would name a women’s magazine after the dragonfly, of all things, is unclear.] ↩
2. [Actually, this site did most of the work.] ↩