The Sable maze series seems to revolve around people getting lost in mazes, or possible around sable being a classy word, especially when used as an adjective. The premise of this particular entry in the series deals with an entirely fictional old university based in an equally fictional place called Norwich Caves.1 Underneath the campus, there is a convenient maze for students to get lost in, which they promptly do. Your mission is, unsurprisingly, to get them back.

Along the way, you see a gargoyle, lying prone at the bottom of a staircase, with a chessboard in front of him. There is a small diagram lying on the board showing the following position:2 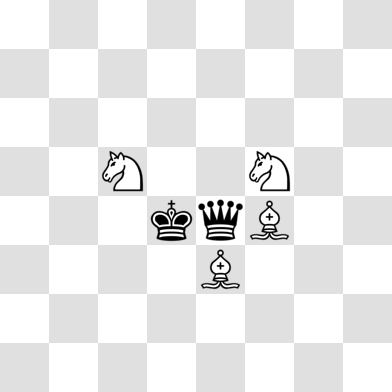 The knight on f5 and the bishop on f4 are already there, but instead of a queen there is a king on e4. That is much more sensible, as the position with the king on d4 is impossible: a double check like this just cannot happen. Of course, even putting that aside, the position is almost as ludicrous as the plot of the game. Why on God’s green Earth would white have promoted to a bishop?3

Either because he likes pointless extravagance or because he’s an idiot.  In any case, it is likely he went on to design hidden object games.

Realism: 0/5 Putting aside the impossible double check, there is also the minor problem of the missing white king.

1. [Which, to my great annoyance is pronounced nor-which instead of nor-ridge.] ↩
2. [If you also want to leave small diagrams lying around in random places, I suggest this site.] ↩
3. [Is this a reference to Norwich’s episcopal significance? Probably not; I don’t think the game designers put in half as much thought as I did.] ↩