Do you remember when we talked about inspector Morse? The famous detective based on the novels by Colin Dexter and played by John Thaw? Well, that same John Thaw also played the eponymic character in Kavanagh, a series about barrister James Kavanagh that originally aired on ITV from 1995 to 2001. Kavanagh takes on a private prosecution murder case. There is some interest in the plot, but not for this blog. For this blog, a minor side plot about one of Kavanagh’s colleagues trying to get into an exclusive club is more relevant.

Because if you are mingling with an exclusive club, you are going to meet some people playing chess. Playing chess badly, probably, but that’s like blood in the water for the big sharks of the chess in popular culture blogosphere.1 The prosecution is eager to gather evidence.

The first time we see the chess board, there is a massive clump of pieces on the king’s side, but a more precise reconstruction is impossible. Shortly after, we get a better view from the other side. It was still not easy to reconstruct the position — in fact, I mostly had to guess — but at least I could give it a go. My go was not very impressive:2 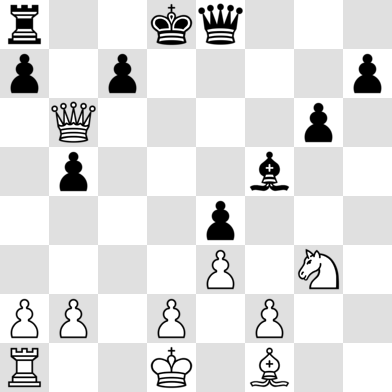 I’m quite sure about two things, though: a1 is white and the kings are on the d-file instead of the e-file. Also, white’s queen position is extremely exposed. I think the prosecution has an excellent case here.

An even if he doesn’t get a conviction — highly unlikely with Kavanaugh doing the pleading, I will still be here to judge the defendant harshly.

Realism: 1/5 The board is set up wrongly, the kings are in highly suspicious positions,

Probable winner: Black is to move here, so he should win easily.