Now here’s something different! Companies sometimes organise chess tournaments as a form of advertisement. They may sometimes even offer personal sponsorship to really successful players. But I hadn’t heard of a company organising a problem solving contest. Yet it happened all the way back in 1967. The company that came up with this original idea was Paul Masson; a Californian wine brand which, apparently, is mainly known for its sparkling wines and its association with Orson Welles, who did quite some advertisement for it. But in 1967, this was still to come. And if you cannot get a world famous actor, you obviously stick to chess compositions.

I know very little else about this ad.I don’t know where it was published, although I presume it must have been in some American magazine, maybe just a local one. I do know the composer, though! According to yet another chess problem database, it is a problem by none other than Koltanowski 1

I guess the position is clearly recognisable in the picture above, but it cannot hurt to give it again, so here goes:2 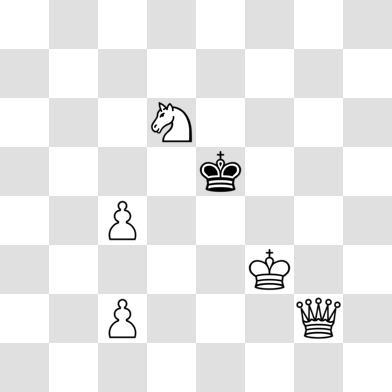 Wh… Pink has to give mate in three. Three ‘nice, leisurely’ moves, as the ad claims. I’m not sure what makes moves leisurely, but the key (Ne4) is not particularly nice.

But my main problem with this problem is not that the key isn’t particularly pleasing, it’s that the problem works much better if you rotate the board ninety degrees counter clockwise. The job of the pawns on c2 and c4 is to guard d3 and d5, respectively. If the board is rotated and the c4 pawn ends up on e3, the other pawn can simply be dispensed with. The variations are exactly the same, so this would clearly be a superior, because more economical, version.

Realism: 3/5 It seems unlikely that such a position would come about in a serious game, because white could no doubt have forced a mate long before. But then again, nothing is majorly out of place. And perhaps amateurs might play on this long.

Probable winner: White. Sorry, Pink. Even if he doesn’t spot the mate in three, he is going to win by sheer material superiority.