From the title The invisible boy, you might guess that this is some fifties b-movie, perhaps like The day the Earth stood still or The amazing colossal man1 — and you would guess correctly! It is a movie from 1957 and it is one of those ridiculous sci-fi flicks that seem to have dominated the box office back then. But perhaps you would also guess that it’s about an invisible boy — and you would guess wrongly. There is a boy, but he is only invisible for a small amount of time. Moreover, he is not really the main character and he is not really important to the plot per se.

The plot resolves around a computer which becomes a little bit too sentient. But that’s their problem. We will focus on the beginning of the movie, where the titular boy, still very much visible at that point, has been initiated into the secrets of chess by the aforementioned computer and is giving his dad a good game:

We see half of the board very clearly and the position of the white pieces is, beyond a shadow of a doubt, as follows:2 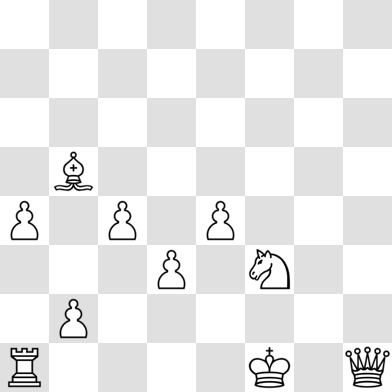 I have made no attempt to give the black pieces for two reasons. Firstly, I have very little to work with and i could do little more than guess. Secondly, I don’t need the black pieces to moan and complain. Black, the dad, announces mate here, but none of his pieces are anywhere close to the white pieces as shown in the diagram. How on Earth could this be mate, then? How could it be check, for that matter?

The kid seems to resign himself to defeat and asks for a rematch. After barely a hesitation, his dad agrees, despite the looming bedtime. They start 1. d4 d5 2. Bg5. The Hodgson attack, years before Hodgson was born!

Unfortunately, we don’t get to see the game up close. We only see the very end of the game.The dad, who has white now, makes a careless bishop move on the king’s side while lauding his son as ‘almost as good as [him]’. Of course, he gets immediately mates with the move Nb4-a6 which, presumably, delivers mate via a discovered check. This takes his dad, who seems to think himself some kind of master, completely by surprise. How does that happen?

Probably it was an invisible mate.

Probable winner: Apparently, half the man and half the boy.

1. [Like that movie, this one is also surprisingly dark.] ↩
2. [Here is a perfectly visible diagram editor. And I promise there are no sentient computers ] ↩