While Rowan Atkinson is widely acknowledged to be one of the greatest British comedians in history, I only really knew him from Blackadder. I had not seen anything of Mr. Bean, even though that’s probably his most famous work. That changed very quickly when I learned chess made an appearance in one of the episodes. Now I have seen one episode and, well, let’s say that I am not going to roast Mr. Bean. In one of the sketches in that episode, Mr. Bean, deep in the bosom of the gentle night, is trying hard but failing badly to get some sleep. One of the ways he tries to remedy that is by watching a chess match on television. How that’s supposed to help you get to sleep remains unclear.

in the seventies and eighties, the BBC1 really did broadcast chess tournaments. In fact, it even organised some for that express purpose..So that’s at least one point for realism. But there’s no clock in sight, yet we hear the distinct of one of those trusty old Gardé clocks.2 So that point is immediately taken away again — they’re clearly full of beans.

The chess board and players are shown very briefly only, just enough to establish that they’re there. Moreover, we only get a view of a view on an old CRT television of the chessboard. The following reconstruction is therefore not completely reliable.3 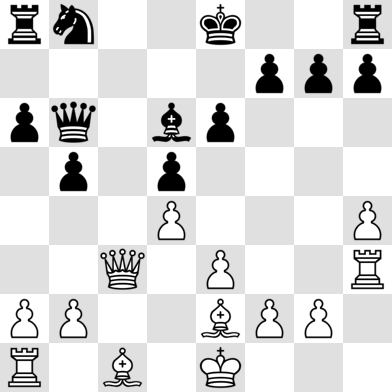 Nevertheless, I think it is not too far from the truth.

Just as Mr. Bean is starting to doze off, black puts out his hand and hovers above the b5 pawn. However, he retracts his arm and Mr. Bean dozes of again — BAM! loud interruption by some rock music! What fresh horror is this? Who would do this? Well, people who watched the final of the Grand Prix last Sunday, I imagine. That didn’t amount to a hill of beans.

Realism: 4/5 There is nothing particularly weird about this position. Okay, the rook on h3 is slightly unusual, but especially beginners might be very tempted to develop it there. Hey, it’s not even too misplaced.

Probable winner: Nobody. Okay, a lot could still happen, but the position seems more or less balanced. White has the bishop pair, but the one on c1 is not going to attract a big congregation. Black’s space advantage on the queen’s side is perhaps even slightly more important.

1. [The famous Bean Broadcasting Company.] ↩
2. [That may be nostalgia speaking; I don’t think they were that reliable. But at least they were repairable.] ↩
3. [As opposed to this website.] ↩