By: Nikolaas VerhulstPosted on November 3, 2021

Long after Morse there was Endeavour. It deals with Endeavour who was there long before Morse. I realize that that’s a rather opaque introduction for people not familiar with the series. Morse was a television series we have talked about before. It was named after the main character, detective chief inspector Endeavour Morse. A dozen or so years after that series had ended, a prequel was made about Morse’s younger years in the late sixties and early seventies. This prequel got his first name as a title and it is what we will talk about today. The first episode of the fourth series deals with a computer research group in Oxford that is organising a chess game between Jason, their machine, and an eminent Russian professor named Gradenko.1 There are also some murders, but they are less interesting. 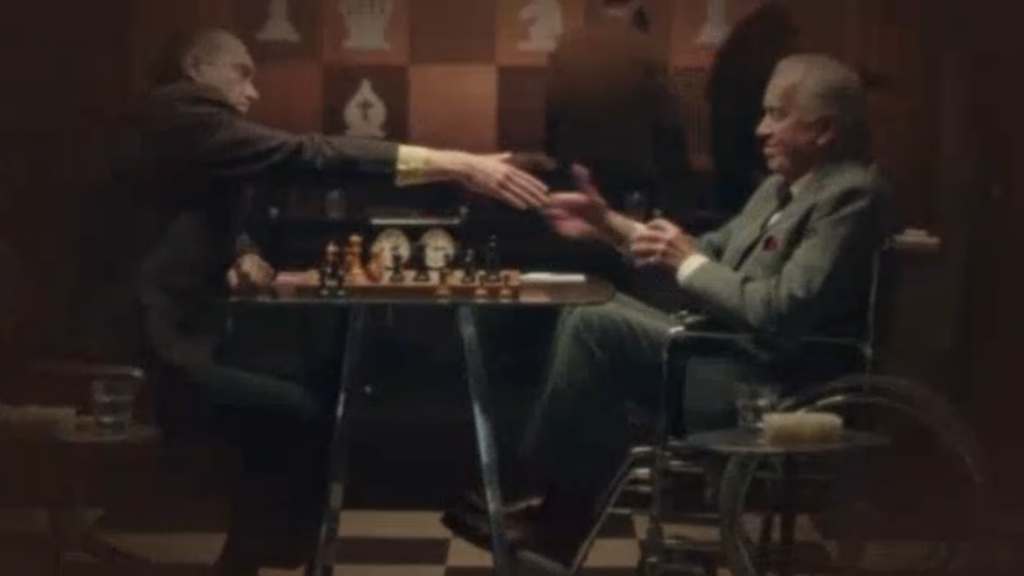 The guy in the wheelchair on the right is the head of the research group that developed Jason, the guy on the left is professor Gradenko. As the demonstration board indicates, the handshake shown is not the one at the start but rather at the end of the game.

At the beginning, Morse hangs around chatting to people. An announcer implores everyone to take their place because “the tournament can begin”. That doesn’t bode well as it’s not a tournament, it’s a single exhibition game which has no official status whatsoever. And I can’t fault aforementioned boding. The move pawn to queen’s four is announced as Gradenko’s opening move, but the computer’s monitor clearly shows 1.e4 being played. Jason plays 1. … Nf6, Gradenko plays 2. c4, and then we lose track.2

The next position we see is on a large board on the lawn outside, where apparently the game is also being demonstrated. The position is this one:3 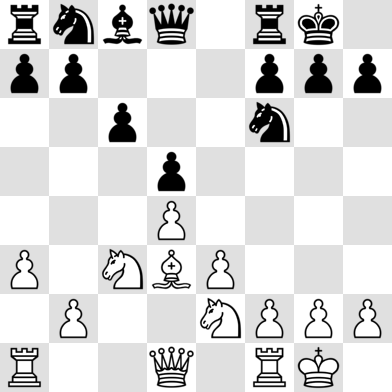 That looks pretty normal, but once you start trying to actually reach this position you find that it’s not so normal after all. The main difficulty is finding a reasonable way to swap the bishops. The most logical route seems to be black playing Bb4, white playing Bd2, and black capturing that bishop. But which white piece took back then? And why did he still play a3?

It gets worse. A break is announced — what? who holds a break during an exhibition game? — and the position we see then on the demonstration board is quite a bit different. White’s knight is on c3, his bishop is still there on c1, black’s bishop is on b4, and white seems to have only just played cxd5. It is at this crucial moment in the investigation that Morse gets called away to solve some murder or something.

Luckily, Jason very gentlemanly slows down, to give Morse  the opportunity to attend the outcome of the game. In fact, for one move it waits for over forty minutes! Once it notices Morse is back, it delivers the final blow: 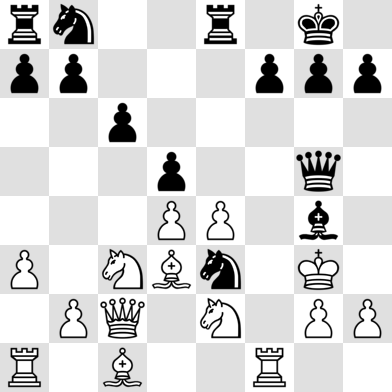 In this — quite ridiculous — position, it plays Nxf1+.

It isn’t. Not even close. Nxf1 is not even a good move. After Kf2, the position is about equal. Something like Bxe2+, on the other hand, would have won without too much trouble. Professor Gradenko can’t take it any more and resigns. Understandable.

Realism: 0/5 The position itself is not so bad, but the fact that the game moves back in time makes this somewhat less realistic.

Probable winner: Black, but only because white resigned.

1. [It is this game we will endeavour to understand.]↩
2. [If only they had stopped here! They would have gotten a prefect score. Admittedly, the post would’ve been less interesting.]↩
3. [You can endeavour to make your own here. You can also endeavour to make better puns.]↩