By: Nikolaas VerhulstPosted on October 27, 2021

Usually, I talk about classy, old movies, or vintage advertisements, or perhaps an episode for some widely popular detective series. But this is an emergency. On October 21st, less than a week ago, the official broadcaster of the Flemish community, published an article online about a dispute between two major international football organisations: FIFA and UEFA. Apparently, these two federations can’t agree on what’s the optimal calendar for international football. I know, it’s hard to care about, but some people manage. I didn’t even try, but I did notice the picture that accompanied the article: 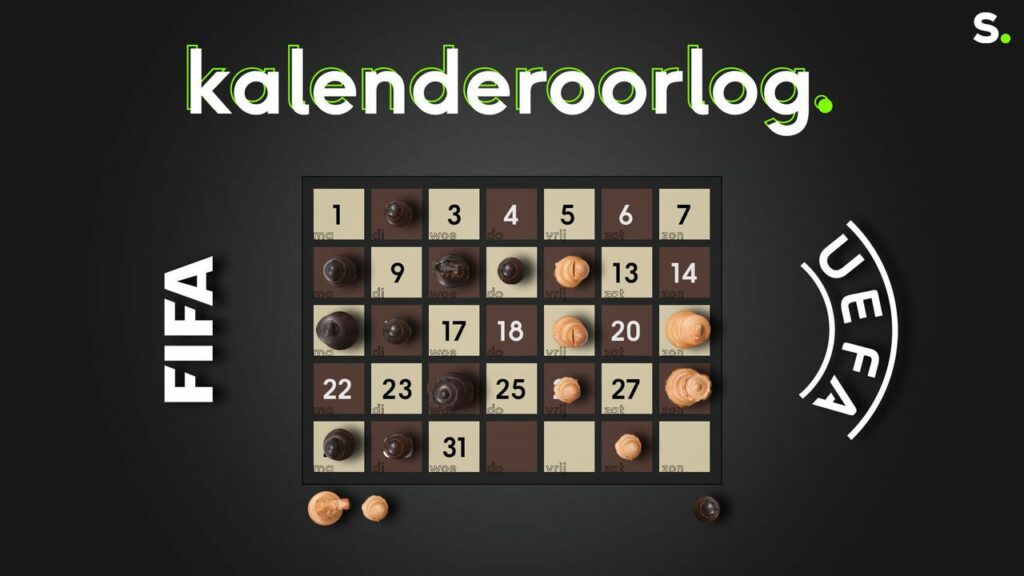 Obviously, this monstrosity had to be dissected. Some attempt at cleverness has been made: the calendar represents the board! Attempts at cleverness rarely end well1 — and this is not an exception. It starts with the month having only thirty-one days. That’s a prime number, so you cannot fit it nicely into a rectangle. So they had to add some useless empty squares and they still got a board with ridiculous dimensions.

Then the position. We get an unusual top-down view of the board with — also unusual — white on the right and black on the left. As the pieces are not immediately identifiable from above, I have made a diagram:2 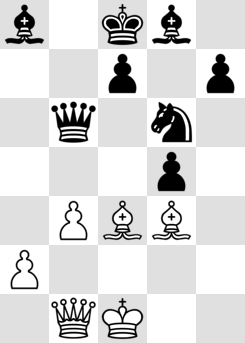 Clearly, this is a disaster. If we pretend that there are two extra files on the left, one on the right, and one more rank inserted above the third one it wouldn’t be too horrible. I would still have questions about black’s dark-squared bishop and the fact he didn’t develop his light-squared one, but maybe he just really hates bishops.

There’s one more very strange thing. White has apparently taken a pawn. This makes sense, as black still has four pawns on the board and, given the number of files, we would expect five. However, black seems to have taken just one pawn. Since there are two left, two must be missing. Apparently, the UEFA is confident enough to play with a handicap.

Realism: 0/5 A board of illegal size allows for only one score.

Probable winner: Probably black. If it’s his move, Nxc3 should give an overwhelming material surplus. If it is not, Bxb5 Nxc3 followed by taking on b5 leaves an interesting position where black also seems to have the upper hand.