Today’s subject, a French film from 1950, is a good example of how getting a bunch of talent together does not necessarily yield a great movie, even if there’s not really anything wrong with the project. The director, René Clément, was one of the most respected European directors of his age and he does a good job here.  Michèle Morgan and Jean Marais, who play the main roles, were highly admired actors and they do their work well. But they have nothing to work with. The problem lies with the script. It would be a stretch to call it bad, it’s just that there’s so damn little of it. The whole plot fits on a stamp — and you don’t even have to write very small: a woman goes to Paris for an affair.1 Before we get to that, her husband can be seen playing chess with another woman: 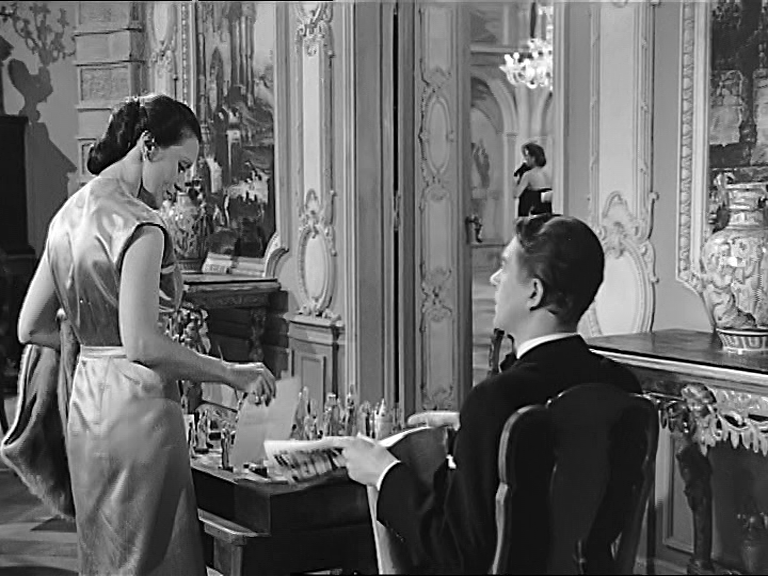 Presumably, this extramarital chess playing is why his wife is looking for someone else. We will anyway not be discussing the position in the above picture. It is quite hard to reconstruct, there are enough other things to talk about, and, as the husband says, chess should be played with chess pieces, not with the museum exhibits they have to rely on here.

Indeed, later on, in the safe confines of their home, they don’t have to put on a display of intricate but unusable decoration and they play with proper pieces. We get a decent look at the position and it is this one:2

Let me stress this again: it is this one. My reconstruction is correct. And yet, black plays her bishop to h4. Also the b2 and b3 knights are now suddenly on b3 and c3, respectively. And black’s queen is on d6. And the a7 pawn is now on b7. Apparently, continuity was not a big thing back in 1950.3

White, somehow, inexplicably, gets it in his head to put his b3 knight on c5. This is the sort of shit that drives wives to affairs. Of course, his opponent immediately mates him with Qd3. She then leaves in both a hurry and disgust at this abilities. Moral of the story: get better at chess. Or your wife and friends will leave you.

Realism: 0/5 The pieces here seem to be in some kind of quantum state in which they are sometimes observed here and sometimes there.

Probable winner: Black checkmates her opponent. Usually, that would be final but, given the history of the game, the white king might suddenly find itself on h2 or, who knows, on i7.

1. [That’s the spoiler-free version. With spoilers it becomes: a woman goes to Paris for an affair, then she comes back.]↩
2. [You can make your own castle.]↩
3. [Even though Bolzano defined continuity all the way back in the nineteenth century.]↩