By 1944, when House of Frankenstein was released, the Universal horror movies their monsters and their stars already had a reputation. And this movie had quite a few of them: a very impressive Boris Karloff as a mad scientist, Lon Cheney junior in his usual role as the wolf man, and John Carradine as Dracula. Unfortunately, the plot is not good enough to keep much interest; it is too silly to be taken serious but not funny enough to work as a comedy. But there are two good things: it is freely available on the internet archive, and there’s a chess scene in it. 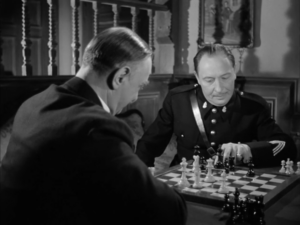 This scene happens some ten minutes in the movie. It is set in a fictional small rural town somewhere in unspecified central Europe. Herr Hussman, the burgomaster of the town, is enjoying a casual game of chess with inspector Muller, the local police authority.

Amazingly, they managed to set up the board correctly. Is there perhaps hope? Could it be that the standards of civilization were, in whatever time period this is set in, higher than they are now and people knew some chess?1 Here is my best reconstruction:2 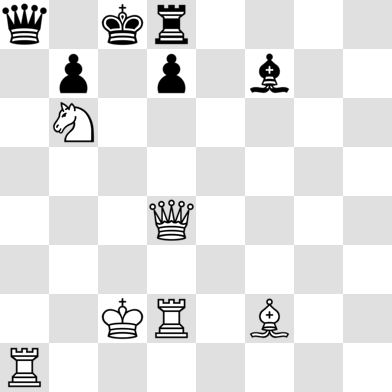 Black is in a serious pickle here.3 He is down a whole bunch of material and he just got forked quite badly. Indeed:

Inspector: That’s a neat trap you got me into.

No, it isn’t. It is an extraordinarily obvious fork which you should have seen coming from a mile away. And you were lost anyway. In desperation, he plays Kc7. White can now take the queen in two different ways, but he prefers to go for the immediate Qd6 checkmate.

Burgomaster: Checkmate. Put it in the book inspector!

For a moment I thought he was boasting that his puny little combination was good enough to appear in a book about tactics or something like that, but no: the inspector actually takes out a book where he presumably keeps tally. Given his position, I think there’s many zeroes in that book.

Realism: 1/5 There are some seriously fishy things going on here — and I’m not taking about the vampires and werewolves. Black should have resigned ages ago, of course, but beginners and casual players tend to play on forever, so that’s plausible. But how did he end up castling queen’s side with his pawns left on b7 and d7? How did he bury his queen on a8? How on Earth did the bishop get to f7?

1. [Maybe because they didn’t have anything else to do?]↩
2. [Things would have gone much better for Frankenstein if he had made diagrams instead.]↩
3. [While he’d prefer a hilarious cucumber.]↩