By: Nikolaas VerhulstPosted on November 16, 2021

The origin of 8 out of 10 cats does countdown is a bit convoluted. The show Countdown, in which participants have to solve anagrams and do basic arithmetic, started in all the way back in 1982 and has been running ever since. 8 out of 10 cats, on the other hand, is a comedy panel show that has been in the air since 2005. They went their merry ways separately until in 2012, for some unknown reason, BBC’s channel four decided to have mash-up day, in which several pairs of programmes were fused. The result was a bunch of comedians playing a game with words and numbers — and it was an immediate hit. It was such a success that the show, which was supposed to be a one-off, has been running for twenty seasons. 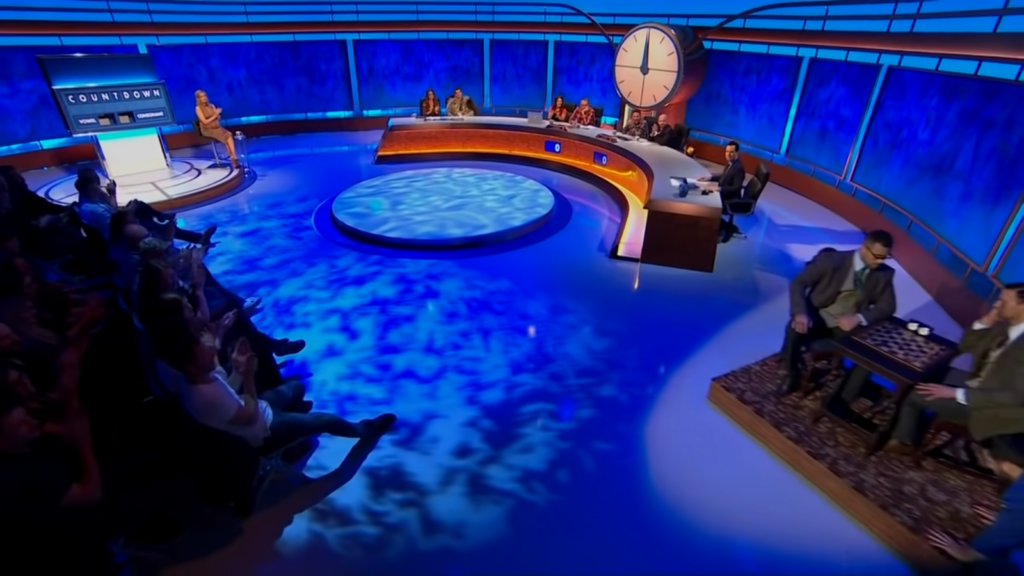 One of the running gags in the later episodes is that the teams are playing for a joke prize, like a bath tub or a pottery wheel or, as in this episode, a chess set.1

There is not much to go on in the above picture, but there is a much clearer shot. It clearly shows a black square where h1 should be. I don’t mind a bit of comedy, but this is not something you joke about, god damn it!2 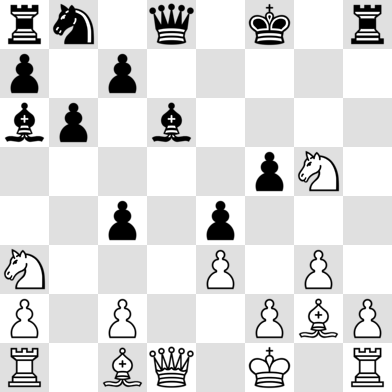 I am pretty sure about the reconstruction of the queen’s side, but less so about the king’s side.

I’m also pretty sure that black plays Be5 here which, if my reconstruction is not too far from reality, is a quite possibly the worst move on the board at it drops a queen with check. What’s even worse is that white starts jumping pieces checkers-fashion! And he hammers the clock with his fist!

These players are appalling! I bet 8 out of 10 cats could do better.3

Realism: 2/5 It is a strong indictment of the state of chess in popular culture that this, with its disastrous Be5, almost gets a passing grade.

Probable winner: Nobody. I think neither player would even be able to recognise they have won.