Watches, especially the high-end ones, have a very posh image. They’re supposed to be for the distinguished gentleman, evoking images of a quiet British club somewhere, with people in smoking discussing economics in an exceedingly polite fashion. “Wait a moment!” someone must have said in a meeting somewhere “That’s just like chess!” and lo! a new advertisement campaign was born. Chess and watches: could this be a match made in heaven? Let’s find out! 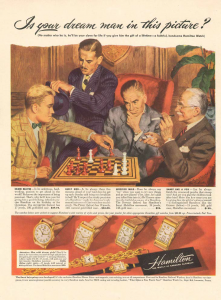 As both the title of this post and the advert itself make abundantly clear, it is about the (possibly real, possibly imaginary) merits of Hamilton watches. It tries very hard to convince women to buy watches for their men and, as a sort of afterthought, men to buy much more expensive watches for their women. To achieve this high aim, four stereotyped chaps are introduced. From left to right they’re called ‘eager beaver’, ‘early bird’, ‘Missouri mule’, and ‘smart as a fox’. Yes, I know. This ad is so fifties it hurts.1

But it does clear up what happens when a beaver and a fox play chess. What happens is, apparently, the following position, with two caveats: 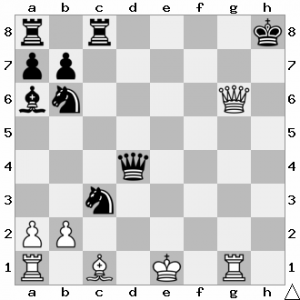 The good news is that the board has been set up correctly. Plus, whoever designed the add correctly assumed that someone who is ‘as smart as a fox’ must be enormously stupid and hence not suitable for playing chess.3 Consequently, white is now busy getting his ass handed to him. That is, if black uses the bishop he’s gotten hold of to give a check, preferably mate on f2. For otherwise, he might just run into Rh1#.

I do wonder, though, why the kingside exploded so completely while the queenside is barely developed. Also, what was white’s last move? The bishop that’s still floating around is probably going to f2, since otherwise a move with the bishop would make no sense. If this is indeed the case, white’s last move could hardly have been with the king.4 There are a few possibilities, but not of them seem very likely.

Realism: 3/5 I have the feeling my standards are slipping, but yeah. It’s better than most positions I have to deal with.

Probable winner: Black; white’s been outfoxed by the beaver.

1. [Although for all I know it could be from the sixties. Or seventies. Or yesterday afternoon.]↩
2. [Made with the finest diagram maker ever developed!]↩
3. [Note that the implication does not work in the other direction.]↩
4. [There is a way though! Can you find it?]↩