One sure sign of an author’s lasting success is when his phrases and his words become common parlance. Very few authors have achieved this in the English language1 , but one of those lucky few is George Orwell: big brother, newspeak, doublethink, have by now earned a permanent place in the vocabulary.2 Hell, even Orwellian is a word now. Of course, with an author this popular, movies3 abound. One of those is 1984 from. It features a chess scene (which I don’t remember from the book, but it’s been ages since I read that) as you probably guessed from the fact that there is a post about it on this blog. 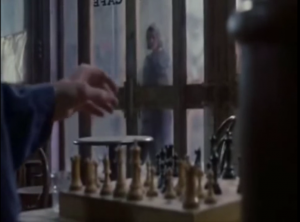 White hesitates so long, hovering his hand over the board indecisively, that the woman has time to leisurely stroll in and sit down.4 And then he decides to play Ne5. Of course, when people make decisions like that, it’s understandable that Big Brother needs to keep a close eye on the population: if you’re this idiotic, you have to be protected against yourself.

Let’s have a look at the board, shall we, and find out just how dumbfoundingly stupid a move Ne5 is. The position is almost surely the following, although I’m not completely sure whether or not there is a black pawn on h7:5 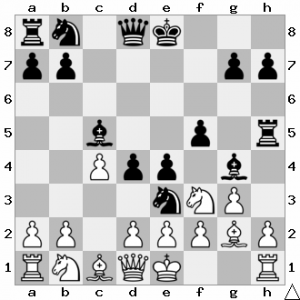 and in this position he plays Ne5. The only reasonable conclusion is that the whole book is nothing but the ravings of a paranoid lunatic; airstrip one is probably an insane asylum where the protagonist has been locked up, to protect innocent citizens against his murderous rampages. Or something seriously snapped in him during his stay in room 101. The most obvious and best move is dxe3, which every dog with a hat on would play without even having to think about it. It would give white a winning advantage: my engine evaluates the position at a smidgeon less than +3. Ne5, which he played instead, gives almost -8.6

Plus, how the hell did he wind up like this? Why wasn’t he able to see that black was making many more moves than white? The white pieces are in very stereotypical positions for the Réti opening, more precisely, after white has made four – that is four – moves. Black, on the other hand, has made about twenty. He has not used them well, though: his bishops are effectively placed and his pawn centre looks formidable, but why (and how) did he get his knight to e3?

My suspicion is that this was some sort of attempt at symbolism by the director. By putting all the dark pieces on threatening places, he’s probably trying to conjure images of impending doom. This is probably why the protagonist ponders his move for so long: that’s supposed to suggest despair and helplessness. It might even have worked, were it not for the fact that black is what’s technically known as toast.

Realism: 1/5 I think I have made my point. Black has played at least twelve moves. And what happened to his c-pawn?

Probably winner: Whoever turns up to play black.

1. [Which usually prefers clobbering other languages in a dark alley and take their words.]↩
2. [As corroborated by my text editor, which does not adorn these words with its squiggly red line.]↩
3. [Strangely, movies does get the squiggly red line.]↩
4. [Without taking off her coat, which happens surprisingly often in movies.]↩
5. [Made with this. I’m fed up with finding a new way to say that every time.]↩
6. [Interestingly, taking the queen isn’t even the best move, apparently.]↩